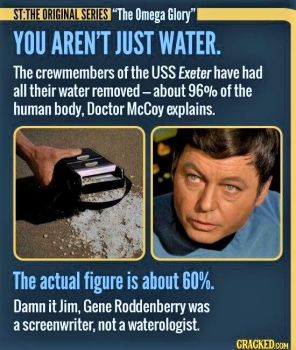 "I wanted scientists to be able to watch our show, believe it, enjoy it and not laugh at it," Gene Roddenberry is reported to have said.

How successful he was remains to be seen -- in fact, we'll get down to seeing it right now. Now, we're not saying that these are bad episodes. Some are actually very good. And unlike some nerds out there, we aren't saying that getting the science wrong is a huge problem, either. We're not scientists, but we love 'Star Trek' -- we do watch, believe, and enjoy the show. And we also laugh at it, sometimes.
Created by Mischka Published 31 May 2021

Then after it was cancelled the US landed on the moon.

OMG, you folks have me clutching my sides!

A worse fault than poor science is poor story-telling, and ST could excel in that area, as well. But like most fans, I grew up liking the series when I was too young to judge.

Do you all know the story about how it was going to be cancelled, and was then saved by a letter-writing campaign from the fans?

The writer Paul Di Filippo, who writes a monthly column for a science fiction magazine, once wrote a fake history in which a letter-writing campaign begged Roddenberry to cancel the show, but it made him even more determined to keep it going. Hilarious stuff.

Easy mistake to make, confusing human beings and cucmbers... personally I prefer the taste of cucmbers.

I saw that episode..
Survived the H2O misrepresentation to go on and enjoy a crystal entity call the crew a bunch of ugly big bags of water !! :-))