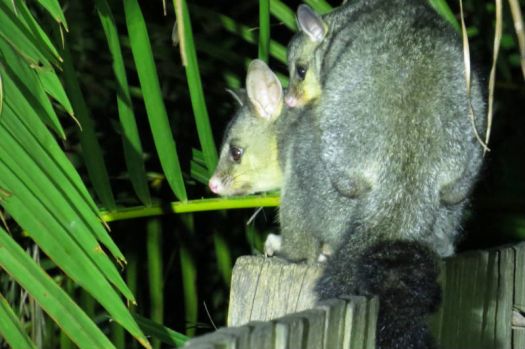 ...on the back fence last night - 7.30pm. These are Brush-tailed Possums, and we also see Ring-tails, which have no fur on their tails.
This morning we found the single bird feeder knocked to the ground - it hangs from a nylon rope - so these two were probably the culprits!
Luckily, I'd removed the pottery dishes from the main feeder - so nothing got smashed!

Thanks morris - I'll pass the compliments on:)))

Thanks ikook - and it's interesting to compare the very similar animals:))))

LOL! I guess we get off lightly compared to you Dave. I can just imagine the frustration ...and mutterings:))))

Some animals are grazers, Robyn. Racoons here, for example, will work through a garden of sweet corn peeling ear after ear and only taking one bite. Its very frustrating!! Deer do it too.

Sorry snooker, I indeed missed out on the 'here' in your previous comment. The number of young in your opossums is awesome!

I saw where Rob said theirs only had 1 baby and was trying to show her the difference in the number ours have. Thanks, ikook.

Btw... I love the picture and the possums... a pity about their negative side effects....

These are the US opossum, snooker, not the OZ possum
In this article I read OZ possums have just a few young:
http://www.kidcyber.com.au/topics/possums.htm

They have more than one baby here. Look at the link - one has 15 babies she is lugging around.

And in the flashlight Floyd:))) Next-doors dog barking alerted us to them!! Thanks!!

Caught in the act.
Thanks Rob and Chris.

It sure looks that way smllpkg - Mum must be very patient!!! Thanks!!

Double trouble I see, I think they are rather cute, Thanks, Rob.

They are cute little buggers, but baby needs to get down. He/she is almost a big as mama.

You should hear them fighting - or maybe mating - Barb - they sound like much bigger animals:))) They growl and carry on all night!!! Thanks!!

That's interesting Plumpi - ours aren't too bad most of the year - just when the fruit is ripening do they make a pest of themselves - but then again, I don't grow roses:)))) Thanks!!

Although both are marsupials, the Aussie and American possums are different critters altogether. Our American opossums are not noted for being destructive; they eat mostly insects, snails, overripe fruit, baby rodents, and such. OK, maybe a bird egg now and then. But on balance, they are beneficial creatures.

Looks like cute little animals and the mother is doing everything in her power to raise her baby to maturity....Thank you Rob, great night photo :)

Thanks Janet:))) We had to put a piece of PVC pipe over our electricity line to the house to stop them getting onto our roof - and it works well!! We never heard them on the tiles - but they used to run along the guttering!!! Sometimes they sounded like they had boots on:))) Some night in summer we see them walking along the street electricity wire from pole to pole - and that's a neat trick!!

They sure are Dave - they like to take one bite out of ripening mangoes, and then drop them on the ground!!!

I have to show this to Plumpossum!

A farm wife from Michigan USA, I know about 'possums. Thanks! Memories.

I read an article in a gardening magazine once that said that there are more possums (both ring tails and brush tails) living in Brisbane (which is our state's capital city) than there are living in the bush, now. They have very happily adapted to city living! Luckily a LOT of people in Brisbane grow beautiful native trees, so no food shortage. Plus kind people like Rob who feed them! Apparently they also LOVE rose petals! hugs, janet

Darn pesky troublemakers! Of course they are just trying to survive.

You'll get there Lyndee:))))
I just Googled them and they usually only have one at a time - which must be a relief for Mum:))) Thanks!

LOL Robyn....it took me a few seconds to see the baby! Do possums only have one baby???

It sure looks a load to carry around snooker - must be close to going solo!! We're working on modifying the hanging single feeder - but it's plastic and wire, so nothing can break!! Thanks!!

A good nocturnal photo, Robryan (and Chris!). That is one big "baby"! Keep that pottery away from them!

That "baby" is getting a bit too big to ride. Poor, mother. Hope you can save your feeders from total destruction.

Precious!
And glad to hear your pottery is safe! :)