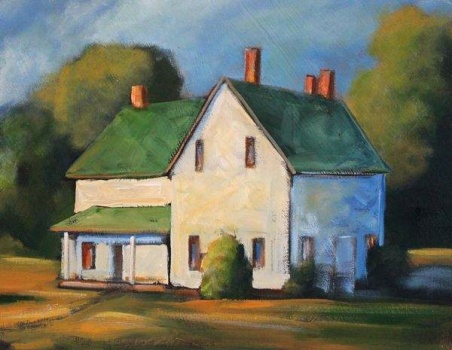 The price of glass! @Eli4me It was sinister then, just like the price of gas is now. 😊 Gail

Why are the windows so small, something sinister inside?

Okay, I kinda pushed in front of some folks not paying attention to get in front of the "Rain God" He wasn't very happy to see a pushie person in front of him. But, I explained the situation to him (even gave him one of the "hearts") begged him to send rain your way. He promised you would get some but that I would have a black mark on my tablet that I would have to do good things for a month to get it off.

So, I assume your forecast calls for rain. No thanks are needed.

Can't help it kiddo. I get overjoyed when something new is accomplished. Is it rain yet???

Check out my puzzle with the people on the train. See if you see anything unusual. I did not see it when I posted it and not when I did the puzzle.

It's just rumbles so far. @bettysweet you're like a 5-year-old spongechild! 🤣

Wow! The birds are really rowdy here, I hear thunder, there's a breeze...could this be it? The mystery of the day! 😥☔⛈️

Well my number is coming up soon. I am not opposed to begging!!

Okay I can touch the 😍 WOOW look what happened. Oh how I love to learn new things. What a dandy teacher you are.

@bettysweet I push down the "Microsoft" logo on the left and the "period" at the same time and up pops more choices than I'll ever need. They even give me several choices of skin tones and a variety of mixed couples. I wish I had more dog choices though.

Thank you so much for your assistance in the rain department. It's feeling heavier here, but I'm concerned that it's a thin diagonal line that won't last long, according to the radar. WhEEEEEEEEEEEEEEEE Thunder! You might have done it bettysweet! ⛈️🥰

I'm going to have a talk with the Rain God to bring you some rain. I'll let you know what they say. It's a department now and you have to take a number. My number is 7 so it may take a bit.

That's a good idea to make that a room without access to the rest of the house. No sneaking around the house at night for those strangers.

I love those cute little umbrellas, clouds ect!! Perhaps you can teach me how to get a collection of those when my brain stretches abit more to hold additional information.

Here's a good one -- an old house in Cataloochee NC had a room on one side of th porch that was only accessed from outside. It's the room where the strangers slept when they were passing through. ☔😊⛈️ 70% chance today!

We had one of those nearby, gone now, but it was actually a dormitory, men and one side, women on the other. 🤔 Gail

Haven't you seen those old farmhouses with two front doors on the front porch? Now explain that to me! Curious minds want to know.

Thanks @Isaly2! I spotted that door, @bettysweet The funny thing is that it's hard to tell which is the front and back of this house, like it's two houses put together and they each have their own front. I love that about old farmhouses. But this door has no overhead cover. ☔ (Think rain!) Gail

Thanks @bowsebet58 I'd say you're right about the morning sun, is that the kitchen light on in the back? 🤔 Gail