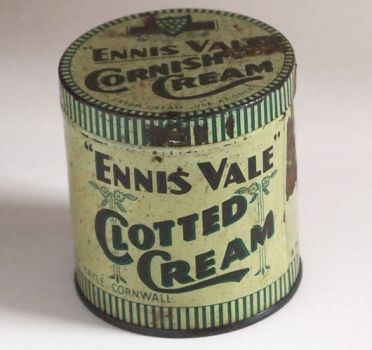 We all had milk straight from the cow (with a couple of gnats floating on top) and... survived!

Our favourite food was a slice of fresh made bread, covered with Tate and Lyle Golden Syrup and topped off with Cornish Cream. Back in the days when out milk was straight from the cow, it was slowly boiled and left to cool. The top formed a clotted cream crust which was skimmed off for teatime.

Not knowing what clotted cream is ...I googled it...sounds like something I would
love.... I found a recipe on how to make it....

I wonder why they don't produce it in the US? I wish I could send some over, Lilygirl (on the magic carpet).

I couldn't resist posting this when I found it. Another bit of serendipity!
Thank you, Rosie.

Made me cry too,being Cornish myself. Unfortunately they don't send it anymore. What I would do for a tin of this. Sigh!!

Oh, my goodness. Made me cry. Thank you, Patricia. It was such a sweet gift.