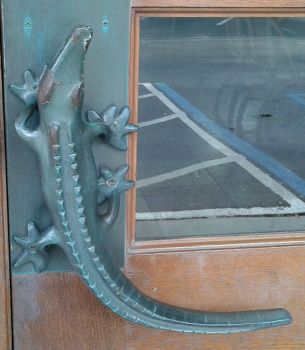 Found on a Seafood restaurant door.
Created by redina1 Published 7 May 2019
Why this advertisement?

Sounds interesting, iceng, but I probably wouldn't understand if you explained it. :))

Good morning, FW. Thanks for visiting. :))

Are you saying you could make these, iceng?

It should not be too hard to cast some iron in a back yard sand casting, wire brush it after it cools, drill feet and paint :-))

The first picture I took showed the reflection of a man walking toward the door, so I waited and tried again. If you're ever in St Pete, stop by the Shrimp Factory, say hello to the gator and have a nice meal. :))

Thanks for solving and commenting on this, my friends. :)

We had dinner there again tonight and I asked the hostess where it came from. She had no idea, but agreed that it is really neat.

this is so unique and lovely xx ♥

If I ever have to replace my front door, I am DEFINITELY getting one of those!! I would position the lock near his mouth for effect.

Yes, and I was invited to join him on stage to hold a snake..
We had a school group and teaching respect for nature.. The snake was sunning on a structure ledge at knee level.. There was excitement enough when a kid pushed the snake with a stick.. We released the creature a mile out of camp :-)

Marlin Perkins really came to your school? We used to watch his TV show all the time, and poor Jim did all the rough stuff. Can't imagine why you caught a rattlesnake instead of just killing it.

I learned snake handling when Marlin Perkins, when he came to our school, and have since caught and removed a rattlesnake from a campground in Nevada wilds..

I would never 'reach' for a snake! Our little lizards here are harmless. A friend's grandfather use to let them bite his ears and they would hang on. His way of entertaining the grandkids.

I have never seen a puppy door pull, iceng. But then, I'd never seen an alligator pull before, either. He didn't snap at me when I grabbed him. Not scary at all. :))

I somehow like it too..
It is metal with a growing patina..
And a lizard is not something you are readily willing to touch..
Iv never seen a puppy door pull :-))

@AuntieGator I know you'd love to have these!