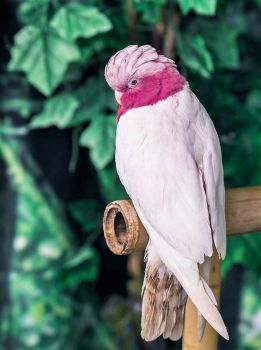 Pretty darling in pink. What you looking at??? 🌺
@Bubble

@CJ45
Good memories Clive, I had to stop typing before because my keyboard was acting screwy.
Rada - do you mean Radar or Royal Academy of Dramatic Art or something else?

@Bubble my Mother had her own buisness when I was a child my sister hated it but there we go and she gave Charlie to a custonmer of hers when she moved on for free she was a vetenairy assistante when younger and used to cut claws of cage birds in her shop for free and all sorts of help to her customers with regards to animals. She had a newsgents tobaccanists and confection shope just up the road to where Harvey lived. He probably would not remember.
My Father was into Rada so was not always there but would open her shope at 6 am for her and close it if he was at home at 8pm some times 10pm She had wooden shutters to protec her glass windows so you could imagine it was a harsh neigbourehood But I loved growing up there still have my memories would love to meet Shirley Jackson ' David and jimmey Hook , Ramond Atwell again as she was eldest
that we all walked walked together to school as juniors.

@CJ45
Clive African Greys are a maybe a third smaller than this parrot. How lucky you were to have Charlie, always wanted an African Grey, such smart birds. Was not able to persuade Harvey but he was probably right. Unless you're prepared to be their parent for 20-40 years and give them a lot of your time, its not a good idea.
What happed to Charlie?

We had a huge parrot sanctuary not far from here but, run on donations but when the owner died, money problems plus politics caused the place to shut down. Hundreds of the birds had to be farmed out, adopted or put down. We had a tour of the place before it was closed and was impressed with what the volunteers did and how caring they were.

Many types of parrots there and a lot of them had plucked out all their feathers due to neglect or solitude from their previous owners and all were wearing little jackets or tops knitted by local people to keep their skin safe. Volunteers didn't last long as the stress and noise caused a lot of them to leave fairly quickly. When we came out we had been deafened by the cacophony of shrieks and calls, parrots are very noisy.

Also one little guy, a sulphur crested cockatoo kept following us and the guide .... creeping
up
to our feet, we had to look where we were going so as to avoid stepping on them as many flew loose. I asked the lady why he was following us and she said that many years ago, she trod on his foot accidently and he had never forgotten. He was always trying to peck her ankles. So sad and there was a lot of publicity about this place. Now its a vacant lot.

@Bubble
When I was a child we had an African grey Parrot called Charlie who lived in our house with our cat and dog all got on together ( I would never have a bird in my house they should be in the open air) so is this bird you have shown the size of my childhood parrot ?
I feed all of my wild birds in my garden every day I have ten species of birds that come every day all at different times, I clean my bird birh twice a day as the silly wood pideons turn round and poo in it silly birds.
But there we go. LOL!!!

Thanks Heidi, I wasn't far out.
My caption is just a joke of course following on the frog puzzles. ( • ͜ʖ • )

Gallahs (aka Roseate Cockatoos) are the size of the Lesser Sulphur Crested Cockatoo. Slightly larger than an Amazon Parrot.
All parrots enjoy a little meat in their diet, believe it or not.