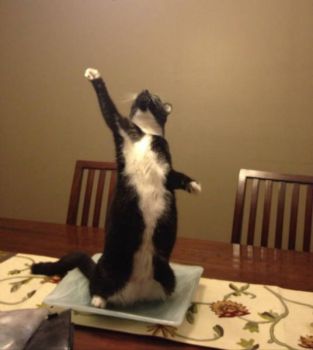 Agreed but would bet someone has a toy in the air and that is what he is reaching for. Let's blame the human. :)

He is definitely proud of something, Molly :)

Oldnanalarissa, please don't try to lecture me: I've never damaged or otherwise harmed any animal. Worked for a veterinarian for twenty years and know how and how not to pick up animals without damage to anyone. No anger was involved in disciplining my cats. My cats also sleep with me, including the 17-year-old rescue that I adopted six months ago; she shows no inclination to climb and loves her scratching post, too.

WOW! He looks like he's singing a very dramatic aria in an opera. Very funny and impressive.
Jyl - lifting a grown cat by the scruff of the neck could damage his spine. A mother cat carries her kittens that way when they are very little. That is safe. Lifting a grown cat in anger is not a good idea. If the cat is in real danger or is threatening someone, or it needs to be controlled for his own safety, yes it's done as a last resort. Dropping him abruptly is no way to treat an animal you care about. You could spray him with water, or startle him by clapping, or by shaking a can full of pebbles. That would be enough, and he would remember. Get him a tower of his own and he won't have to climb on forbidden areas. In case you are wondering, we have had 18 cats so far, including the two we have now. Not one of them ever got on a table or a counter. They sleep with us, share couches and chairs, nap on the printer, have their own climbing places. They feel loved.

Have used Nooo in a deep voice also and it works. :)

We just say Nooo and they stop in their tracks☺☺

Nope, I don't. We just never let them on counters or tables and we could leave things out and not worry about it. Even had one cat trained to ask for his afghan to be put on the chair before he would jump up and lie on it. :)

"I'm gonna GET that darned fly!!" Ooops, looks like Val and I are on the same track.

What, YO? You don't like paw prints in the butter?

I agree about the table, jyl. Our cats were never allowed there. :)

I nearly got that pesky fly☺

In my house that cat would be triumphant for only a matter of seconds; very quickly it would be lifted by the scruff of the neck and abruptly dropped onto the floor to the tune of CATS DO NOT BELONG ON TABLES said forcefully into its face, followed by the stomp on a foot, right beside it.

adorable.. Looks like the Statue of Liberty. Enjoy all your puzzles. TFP {:o) Midge