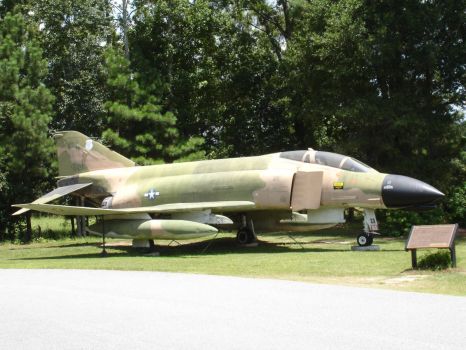 Created by NYIBC7 Published 19 August 2013
Why this advertisement?

I used to sit on the end of the Marine Corps runway at dusk and watch those F4 Phantom's take off with both afterburners burning. That is a vivid memory. They would turn and go straight up. And in Viet Nam when one of them came over the ridge it would just plain scare anyone to death. They look like a bull dog with their nose hanging down. Bad Mean plane. It was a 1957 model and now they are out of service. They use them for targets during training out of Tucson Air Force Base now.

Now before I start getting all the hate mail, be advised that a running gun battle has existed between the F-4 & F-105 Aircraft crews for over 50 years & only exemplifies the "es-sprit de corps" that existed within both of these great warrior units & believe me, personnel of either unit would put their life on the line for the other, me being one of them. God Bless America.

Well, me being a veteran of years with the great North American F-100,& my favorite, the magnificient Republic, F-105, Aircraft, both equiped with the Pratt & Whitney J-57 & J-75 respectfully, & somewhat associated with the fairly respectable McDonald F-4, which is equiped with 2, GE J-79 Engines, where-by the F-105 was called on to escort & protect the F-4 Aircraft as it ventured into & back out of N.Viet Nam, in all sincerety leaves me extremely proud to have been associated with ground & flight crews of all 3 Aircraft, while on the other hand, it is almost unforgivable that one of the top Pratt & Whitney Engine mechanics on my overhaul crew abondoned all sanity & was hired as a Jet Engine "Tech-Rep" for GE. Bah Hum Bug.

The F4, proved that with enough power, anything can fly.