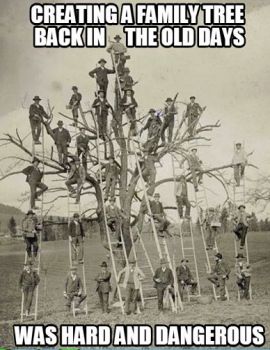 The study and tracing of lines of descent (family trees)is known as what?
a) gametology
b) garbology
c) gelotology
d) geneaology
e) genecology
f) geobiology
Created by Stillmanic Published 21 January 2020

But Hoff you are no ordinary Sloth!

Some can pull it off, Lions for instance, but sloths, I am not certain.

I am sure you would look very fetching :))

I have often considered cornrows, but just am not quite certain I could pull it off.

Have you ever thought of a braid or two Hoff. You could set a new trend :))

You are a lucky fellow.

Why thank you! Just had my mane and tail plaited...

The new stable-girl is very obliging! :))

Hm, I have just checked my gelotometer.

As Jello has nothing to do with trees, discard gelotology and put genealogy in the proper place.

Please note, genealogy is NOT actually on the list.

This one I can answer. Thanks, Bonnie. ☺

Thanks a lot Lefty, I'm very ashamed, to forget the obvious

Women have more sense than to stand on bare branches of a tree.

The answer is of course iii).

That would be choice v).

what about g) gynecology?

This one I DO know.

Gelotology is quite simply the study of Gelo.

In most countries, it is spelled Jello, but it is completely acceptable (especially in the field), to call it Gelo.

Thank you and LOL Hippo :))

Well done, in advance Ellen and I don't blame you :))

I'm staying out of that discussion below! But I know the answer.

Are you accusing me of agnotology?

I suppose I might be wrong. My forte being agrostology/graminology...

Gelatology, however is a great hobby :))

Shouldn't that be gelAtology? My favourite subject of study...

There are a couple of words in that list that inspired me to investigate further.

Heard about the drug addict fisherman who accidentally caught a duck? Now he's hooked on the quack.