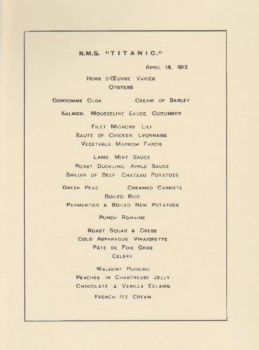 The subject of the R.M.S. Titanic came up yesterday, so doesn't everyone want to know what the last meal in First Class dining was like?

The Titanic sank on that horrible night of April 14–15, 1912, but First Classies had a nice meal.

According to historian Diana Overbey,

"The White Star Line aimed not only to impress Titanic's passengers with luxurious accommodations and amenities, but also with its dining selection. After Captain E. J. Smith, head chef Charles Proctor was the highest-paid crew member on board the ship.

First class passengers had the largest number of dining options. Bugles sounding "The Roast Beef of Old England" (the traditional call to meals aboard White Star ships) signaled the serving of lunch and dinner (though a dress call was sounded a half hour prior to dinner as well).

At this time passengers would perhaps go to the dining saloon located on D deck. Stretching the entire width of the ship (114 feet), it could seat up to 500 people. Seating was assigned and passengers generally had the same dining companions throughout the trip....
...
Before leaving Southampton, Titanic took into its inventory 127,000 pieces of tableware, including bone china dinner plates, cut-glass tumblers, and fine crystal. 75,000 lbs. of fresh meat and 11,000 lbs. of fresh fish were brought on board, along with 40,000 fresh eggs and 1,500 gallons of milk. Ingredients to prepare meals to rival those of the finest restaurants in Europe stocked the ship's pantries.
...
On the evening of April 14, first class passengers in the dining saloon were served a seven-course meal. Hors d'oeuvres or oysters came first, then a choice of two soups. Next was a salmon dish followed by a choice of chicken Lyonnaise or stuffed marrow. This was followed by the main course, which was a choice of lamb, duckling or sirloin of beef along with vegetables. After the main dish passengers chose from four light savory dishes such as cold asparagus vinaigrette, and then finally were served one of four desserts: Waldorf pudding, peaches in Chartreuse jelly, chocolate and vanilla eclairs, or French ice cream. If one wanted wine or other spirits they were required to fill out a card at the table.
...
Meals were a time for camaraderie among the ship's passengers. And for first class, it was a time to see and be seen."


For further details (Overbey describes how the other classes dined), click on the link below and see some more documents and b&w pictures.
Created by Mischka Published 20 July 2020

Hear him not I can.

Can you hear Yoda, complimenting a new brand of honey.

It could very well humbly be.

Would that be out of respect, so your humbleness can keep up.

I do quite well with my morning sales. My mourning sales though, are rather slow.

Tonight we have a reely big shoo.
Next on our stage, it's Hoff, singing that smash hit "Who Will Buy This Beautiful Morning?"

Please sir purser, may I have some more?

I used to drink 2-3 POTS of coffee a day when I was younger. I would read in bed with a cup of coffee, turn off the light and go right to sleep! Never bothered me at all!

Can't even sleep 4 hours after a sip of an energy drink.
So is the coffee tolerance just another fantasy aspect of the novel? We all wish we could have the zip we had at age 6, when we want it...

You know you're cheap seats girl. :)

Never understood how people can drink coffee late at night. Have any of you read "The Girl With the Dragon Tattoo"? The Swedish characters drink coffee all day and twice at night, and then go straight to sleep.

It's entirely possible (this happens a lot) that the author was just drinking coffee whenever writing, and didn't realize. I often say, Don't try to play the drinking game with Fred Brown's books! You'll pass out before you finish even his shortest novels.

Thanks for the info Fiona. Even 3rd class sounded pretty good.

@jimez - I never found a pic for the Cheap Seats.

"The second class dining saloon was also located on D deck and stretched the width of the ship, but was smaller at 71 feet and a capacity of 394 people, which meant diners had to come at different 'sittings.' The room was nicely appointed with mahogany furniture and oak paneling.

The kitchens for both the first and second class dining saloons were located on D deck to expedite service, as were the serving rooms, pantries, and bakeries. Each kitchen was equipped with two ranges (each with 19 ovens), as well as electrical slicing, potato-peeling, mincing, whisking, and freezing machines.

The third class dining saloon was located on F deck, and once again stretched the entire width of the ship. At 100 feet long, it could accommodate 470 passengers, which meant that third class passengers ate at three different 'sittings.' The room was well lit with portholes and side lights, and was finished in enamel white. The third class kitchen and pantry were located just aft of the dining saloon."


"On the same evening in the second class dining saloon, passengers were served a four-course meal. This included a clear soup, a fish course of baked haddock, a choice of curried chicken with rice, spring lamb, or roast turkey with vegetables or rice, and a choice of dessert, which included plum pudding, wine jelly, coconut sandwich or American ice cream.

While the first and second class midday meal was called 'lunch,' and the evening course called 'dinner,' the main meals in third class were labeled 'dinner' and 'tea.' 'Dinner' in this case was served midday, and consisted of soup, a meat dish such as roast pork, a dessert, and fruit. Tea included a cooked course, bread, a light dessert, and, of course, tea. Besides these two meals, breakfast and a late supper were also served. Breakfast included cereal, kippers or boiled eggs, bread, marmalade, and tea or coffee. The supper meal consisted of cheese and biscuits or gruel and coffee."

I'm not real big on authors, you know. I did like it in The Scarlet Letter when Demi Moore took that bath.

Though they've belted you and flayed you,
By the livin' Gawd that made you,
You're the best Sloth to be found in all this din.

He was just the water boy, I will leave him be.

Shoot the bugler? How Gunga Din!

So we do not shoot them?

Yes, you’re doing it completely wrong. For a bag of bugles you want dip, not a clip.

I have a bag of bugles, and tried to call them. NOTHING. I would like to see the clip, IAs I am obviously doing it wrong.

Unfortunately that follow-up clip of bugle calls has disappeared and been replaced by one that's not as good. I wish I'd have grabbed the URL for it when I had the chance.

Glad to bring some historical FACT to the myth surrounding this once proud ship.

Hoff, you have clarified many things about that fateful night. Iceberg lettuce, *of course*.

I've now listened to "The Roast Beef of Old England" (the traditional call to meals aboard White Star ships) and find it disturbingly wanting. I much prefer the distinctive U.S. Army Mess Call "Come and get your beans boys..." as played on the bugle (which I did when I was a Boy Scout).

By the way, when I listened to it there was another clip which followed. That clip has a number of Army bugle calls, very briefly explained. I think you'll find them remarkable, unique and entertaining.

Trout cheeks are far too small for one bite... yet such a delicacy.
Even though they're cute too, in their own aggressive way.

I missed that, Pat. You're right. There would not be enough meat on there for one bite! And they are soooo cute!!! lol

I agree, Pat. Fox hunting was an upper class treat in those days too.

Well he had a Mickey Mouse staff.

Mickey Mouse, on the other hand, blamed the staff...

Always blaming the staff for not holding up their end of the menu.

While speeding to get the menu prepared, the chef FORGOT the Iceberg lettuce. He complained that his staff had forgotten it, and demanded the Captain stop for some at the soonest opportunity. The message got a bit garbled as it was passed on, and by the time it got to the Captain, it simply said "Imperative that we find Iceberg NOW. Proceed full speed".

What in the hull is going on here.

So Hoff, may we suppose that when head chef Proctor noticed that blindingly glaring omission, he had an ominous SINKING feeling?

And perhaps he even feared that his entire career would soon be under WATER?

Yes, you got it right! There's probably a good science fiction story in there for someone who knows a lot more about orbital mechanics than I.

Come back in a billion years, and see the spectacular Rings of Mars.

Phobos isn't a promising place to settle because Martian tidal forces are threatening to shatter it. But we could safely colonize it for several million years, if anyone were lunatic enough to want to.

Jim, I am happy to store all the oysters I find.

The moons of Mars are named Phobos and Deimos. Which seemed boring in high school.
Until learning a few years later that in English, those names mean Fear and Panic.
Suddenly it was- "Stay away! NOT promising places to settle down!"

He may have saved it from his sports years at Mars University.

A curling push broom... not a whisk broom
.. or a broomoseltzer

Ah......the world according to Marvin. I believe that the helmet house a sawed of broom for it's plume.

jimez, I know you're not. It's just that (jesting) voice & choice of words that's... uh... not just out in left field, but way, way out beyond the rings of Saturn, ya know what I mean?

Or, as another Roman-legionnaire-helmeted interplanetary visitor might say, "Where is my Illudium Q-36 Explosive Space Modulator? You have made me very ANGRY, very angry indeed!"

Fret not oh mighty robf, for it's all in jest. I'm not the android people think I am. :)

It's the android in me.

jimez, you have such a way with words.
Data on Star Trek: TNG couldn't have said it more succintly... or uniquely.

I will always think of you Mischka as an oyster storage unit. :O

Well, I am hiring out for weed removal... just THINK those stubborn dandelions out by the roots.

Rob, you have a penetrating mind. :-)

I would have been full after the oysters! Jim, I'll be happy to post a puzzle about the other dining options, next time.

If I start with getting sooty, and add an "n"... will that work?

Exactly how does ,one Hob Nob?

I could have hob nobbed with those people. They would have been none the wiser!! dj

Mischka, this menu looks adequate for a Miami party.

So not only were the ship and many of the passengers lost, but the food purveyors in New York who were gathering an equivalent stock fit for a castle siege, to feed the return trip, would've lost out on their sale. Perhaps they sold at a smallish loss to other ships; but such details may well be lost to history.

Wonder what they fed the " CHEAP SEATS" holders.