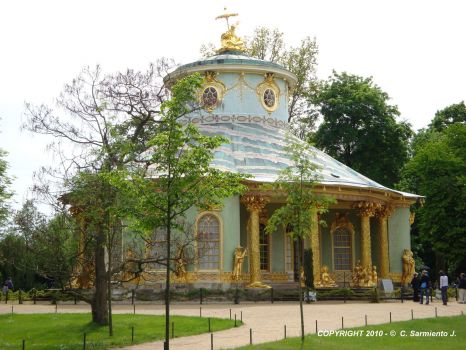 Sanssouci is a historical building in Potsdam, near Berlin.

Built by Frederick the Great, King of Prussia, as his summer palace, it is often counted among the German rivals of Versailles. While Sanssouci is in the more intimate Rococo style and is far smaller than its French Baroque counterpart, it is also notable for the numerous temples and follies in the park.

The palace was designed/built by Georg Wenzeslaus von Knobelsdorff between 1745 and 1747 to fulfill King Frederick's need for a private residence where he could relax away from the pomp and ceremony of the Berlin court. The palace's name emphasises this. It is a French phrase (sans souci), which translates as "without concerns", meaning "without worries" or "carefree", symbolising that the palace was a place for relaxation rather than a seat of power. The name in past times reflected a play on words, with the insertion of a comma visible between the words Sans and Souci, viz. Sans, Souci. Kittsteiner theorizes that this could be a philosophical play on words, meaning "without a worry/concern" or it could be some secret personal message which nobody has interpreted, left to posterity by Frederick II.

Sanssouci and its extensive gardens became a World Heritage Site in 1990 under the protection of UNESCO. In 1995, the Prussian Palaces and Gardens Foundation Berlin-Brandenburg was established to care for Sanssouci and the other former imperial palaces in and around Berlin. These palaces are now visited by more than two million people a year from all over the world.


THE PARK
Following the terracing of the vineyard and the completion of the palace, Frederick turned his attention to the landscaping of the greater vicinity of the palace and thus began the creation of Sanssouci Park.

In his organisation of the park, Frederick continued what he had begun in Neuroppin and Rheinsberg. A straight main avenue was laid out, ultimately 2.5 km long, beginning in the east at the 1748 obelisk and extended over the years to the New Palace, which marks its western end.

Continuing the horticultural theme of the terraced gardens, 3,000 fruit trees were planted in the park, and greenhouses and nurseries laid out, producing oranges, melons, peaches and bananas. Statuary and obelisks were also erected, with representations of the goddesses Flora and Pomona.

Frederick invested heavily in a vain attempt to introduce a fountain system in Sanssouci Park, attempting to emulate the other great Baroque gardens of Europe. Hydraulics at this stage were still in their infancy, and despite the building of pumping houses and reservoirs, the fountains at Sanssouci remained silent and still for the next 100 years. The invention of the steam power solved the problems a century later, and thus the reservoir finally fulfilled its purpose.

From around 1842, the Prussian Royal family were finally able to marvel at such features as the Great Fountain below the vineyard terraces, shooting jets of water to a height of 38 metres. The pumping station itself became another garden pavilion, disguised as a Turkish mosque, with its chimney becoming a minaret.

The park was expanded under Frederick William III, and later under his son Frederick William IV. The architects Karl Friedrich Schinkel and Ludwig Persius built Charlottenhof Palace in the park on the site of a former farm house, and Peter Joseph Lenné was commissioned with the garden design. Broad meadows created visual avenues between Charlottenhof, the Roman Baths and the New Palace, and incorporated the follies such as the Temple of Friendship of Frederick the Great.


THE CHINESE HOUSE (This photo)
The Chinese House, designed by Johann Gottfried Büring between 1755 and 1764, is a pavilion in the Chinoiserie style : A mixture of rococo elements coupled sith Oriental architecture.


(All the puzzles I share in Jigidi are always from a photo that I have personally taken while traveling).
Created by csarmientoj Published 15 June 2021