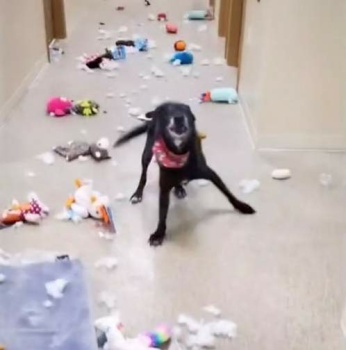 Then who wouldn't be after a party like that. HEHEHE The video is great enjoy.
https://www.thedodo.com/daily-dodo/shelter-dog-gets-out-of-kennel-and-throws-a-party
Created by Rainrider1214 Published 7 February 2022

If you copy and paste the above link you will find the whole story. He lives in a shelter, was a very stressed and unhappy fellow until they decided to make him the Main Greeter at the desk. He now greets people and then rushes off to Get Someone. They had shut him in his sleeping cage for the night, but they hadn't locked it well enough and he was able to escape. He held his own party and during the night he raided the toy cupboard pulling out all the toys that people had donated. The ones he pulled apart all had squeakers in them so they had to be tossed out. The rest were still okay. When they found him in the morning he was so joyful they just felt he had needed his party and got everything sorted out with no fuss at all. There has been a lot of hilarity about it and he is fine.

@keylime10 Yes she is. Though I am sure she would love a forever home.
@CrazyForMyDoggies I don't think it was so much neglecte, rather a case of, "Why didn't I check that latch again?" Kind of thing. I bet they triple check it from now on. LOL

@Darklldo2 Glad you liked it. Be nice if all dogs were that happy.

@BobaLou Rem was looking my like I had lost my mind. LOL He has his toys all over the place most of the time. So it is party time here everyday.

@Plumpossum The way it reads in my mind, they found it as funny as I would. Though I bet they were happy she didn't get into the food. :)))

@cappy No way I could get mad at that puppy. I would most likely just join the fun.

Some one is in big trouble, Thank you.

Happy dog, but I bet the dog's owner is not deliriously happy with the situation.

🌲💕The big smile and stance!😀Pup having fun!🌲💕

Thank you for the puzzle and video link Rainrider1214 I just woke my own dog up with my laughter :-) :-) :-) P.S. She wants to be invited to Gilligan's next party lol

Thank you for the link Rainrider1214 it was such a happy tail/tale, and such a joyful dog. :)

This looks like my dog. I would call this neglected. LOL