Stryder on the stuffed lion. 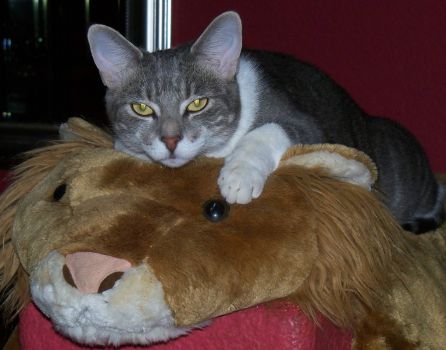 Stryder likes lying on the stuffed lion and posing for pictures. He is two years old here and a very lively fellow.
Created by jjstorck Published 9 August 2017
Why this advertisement?

Judi, you asked about the puzzle with my sister's neighbor's wisteria. My sister is guessing it's about 20 years old. - Patsy

Thanks for sharing those stories--with joy, sadness, and lots of work. You are very caring! I don't know how you have kept track of everybody. Whenever I do a puzzle with one of your kitties, I'll look to see if you have mentioned them here.
Incidentally, all four of our present cats are from a rescue organization that specializes in finding homes for stray & abandoned cats and kittens that have been or can be sufficiently socialized, and TNRing feral cats that aren't adoptable.

2 or 3 years later - we saw a white/gray tiger cat & a pale orange tiger (Tawny). After a time (of course putting food & water out for them)(also had a cardboard box with bedding in it under the house) we saw 4 little ones. Puddy Cat (white/gray tiger like Mom), Swirls (dark swirly gray tiger), Million (light gray tiger) & Jack (black & white). Puddy was the only girl. Planned on getting all of them TNR'd at 5 months. SHOULD have trapped them at 3-4 months because Mom had another litter. SO SOON!! 5 calico girls & 1 (blue gray slightly tiger & white) - Stryder. Tried several times to trap Mom, but she would not have it. Jack was bit by a rattlesnake because he was protecting the babies - he died before we could find him. Gathered the babies at about 7 weeks - inside, vetted & fed special milk from the pet store. Trapped and TNR'd Tawny (Dad kitty), Million, Swirls & Puddy girl. Could not trap Mom. She disappeared, then Swirls left, after a while Million left - Puddy & Tawny stayed.

Well we have a large family because: Amber was a stray, I remember seeing a long haired black cat, a white and orange tiger cat and another male (don't remember that coloring) walking down the sidewalk away from under our manufactured home. Maybe I should have put a red light out there for Amber (hee-hee). After the gestation time, one morning I heard a kitten yowling. It was Max - early morning I guess he was after a moth and got his little claws stuck in the holes of the skirting around the house. I caught him not knowing where he came from (maybe a drop off?). Got him vetted and then he stayed in the house. 2 or 3 days later we saw Amber with 3 other little ones outside. What we SHOULD have done was give Max back to Mom & his siblings. But we did not - don't know why (maybe because he was already Vetted). Amber had 4 boys - Max (orange tiger), Magic (orange tiger), Mushu (black) and Marky (gray tiger). After 5-6 months Amber wandered too far and was hit by a car. She came back, went under the house and died. I could not catch her. We buried her and took the 3 boys to be neutered and shots (TNR'd). 2 to 3 years later Marky had wandered too far and since we have Coyotes - I guess he met his fate. He knew if he stayed INSIDE our fence he would be safe, but he did like to explore. After that both Magic and Mushu were brought into the house & have been here since - safe.

But we only have 2-4 kitties at a time. You have a large family! I'll ask my sister about that wisteria tree.

I looked at your created puzzles. Your kitties are all adorable. That Wisteria tree is gorgeous - how old is it? Judi

Oh, the one where I noted 'stray kittie' is 'Dusty'. We brought him to the Vet for neuter, treatment of cat fight wounds and shots, but our Vet fell in love with him, said she would love to have him - so we gave him to her. He now resides at the Vet Hospital as their clinic cat. So we get to visit him anytime we have to have a Vet visit. I do think he remembers us. Judi

Thanks for this delightful photo of Stryder, who must be 5 years old by now. You have published wonderful puzzles of a lot of different kitties. Most or all of them yours???