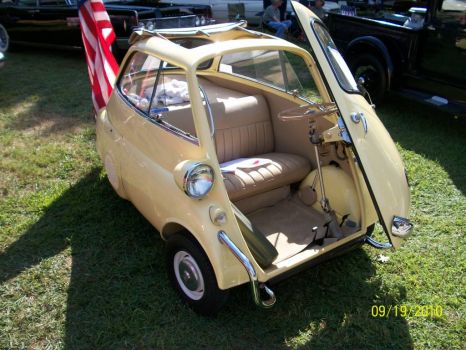 Created by Guttruck Published 7 October 2010
Why this advertisement?

This Isetta looks identical in every way to the one I drove to school, except for the color. I loved driving it! That was back in '71, '72 and '73. It DID have reverse gear. My biggest problem was that the football team thought it was hysterical, and kept leaving it upside down in the center of the boulevard in front of the school each day. Fortunately, it was so light weight I could roll it upright by myself again. In the winter, they would dump it in the middle of the biggest snowbank they could find. But it got 63 miles per gallon of gas, and back then gas cost 25¢ a gallon.

I have a photo of my grandparents getting into one of these. I'll have to go look for it. Love it. Thanks.

Lucky guy, Bet it was fun. Wish I had one. But they are too expensive now.
Pat.

Had one. Loved it.

https://en.wikipedia.org/wiki/Isetta#/media/File:Muenchen_Isetta.jpg
this is the bubble car.... you can't necessarily believe everything some someone says about a car they are trying to sell... they don't always know everything.

Sorry, I thought it looked identical to this one.
https://www.carandclassic.co.uk/car/C252525

You are right that there was a BMW bubble car, but it was the earlier model with windows that looked like bubbles and didn't open.... This model is the sliding side glass model. and not the bubble car. sorry.
Pat.

How lovely a BMW Isetta Bubble Car , these were all the rage here in the 60's.

hey, i do remember seeing these things around as late as the mid 60 s . the ones build by messerschmidt were more triangular in looks, much like their planes but without the wings. they were just a tad slower though than the Me 109

Thx for the info! A colleague of mine drives a Smart car. With big & fast so highly valued, going for the opposite really turns sensibilities on their head.

They had motorcycle engines.

LinM, It is not a sports car, but it is a mini economy car. You are right it only seats 2, but it is very crowded, because it is very small. It has a very small engine, like a lawn mower engine or small scooter engine. Some of these that were made for England, only had three wheels, but most of them had the four wheels with the rear two closer together. The tires are only about 8". Very cool car. Everyone likes them. Kinda like a Smart car today.

What a cool car! Was it a sports car? It looks like it only seats 2.

I drove one of these to high school every day. Except the one I drove was red.

this is a nice BMW Isetta thank you for the picture puzzle Guttruck. yes bevpuzzler8, I got the same, because the Model T Ford turned up missing? I guess someone or the owner removed the puzzle for some reason?? And then, maybe even by mistake? No one knows?

They were made by BMW. Also made [I think before BMW] by Messerschmidt.

Don't drive it into your garage up to the wall - there's no reverse gear and if you can't open the door .....

These are actually pretty good and dependable cars too.

FOR THOSE OF YOU WHO DO NOT KNOW, THE MOTOR IS IN THE BACK. LOOKS LIKE A EURKLE CAR. YOU KNOW THE GUY THAT SAYS, DID I DO THAT.