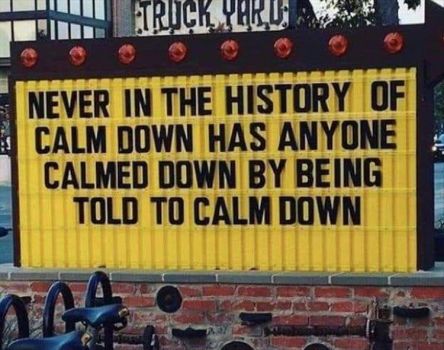 Jean, you're the best. Prepare to be locked up, and they'll be signing themselves in to join you soon.

I'll bake you a cake- l don't need to hide a file inside it- the cake itself will be as hard and sharp as a file-
On the other hand, l trust your silver tongue will get you out.
You'll have them convinced that you are the only one who is sane in the place!

That ought to comfort me more than it does...

Could I ask for a jacket from Hormuz?

It's my favourite strait.

Sit tight Rob, they're on the way. No worries they won't use the sirens.

Well I think they're all interesting.
I don't; only Pierre has any good stories.
And only Jose has a sense of humour!
Aww, can you keep it down, guys? We're into a big pinochle game over here.

Got it.
Do all yourselves have interesting things to say to each other?

It is a compliment to both you and you!
꒰•‿•꒱Jean

Thanks. I consider that a compliment. :-)

Good point. Though in your case Juba, most of them are originals. :-))

Of course Rob. Have you met me?

Welcome to our corner of Jigidi.

Strange is good, normal is bad.

One of my multiple personalities likes things strange.
How about you?

John (Space Man) likes to refer to her too... 'cause of when she said "Jam yesterday and jam tomorrow, but never jam today."

Ah. Off with their heads! That is a strange idol.

Alice Through The Looking Glass

My idol, the Red Queen, is considered strange by some critics, too.

I pick virions for yesterday and tomorrow. Just not today.

I pick both beer and jigidi. Just not at the same time.

l wouldn't dare- still calming down from all that beer (hic)

As long as no one drives and Jigidi, Do it at home, where it is safe.

No one chose Jigidi. Huh.
Well... maybe we just have to get the proper nourishment first.

Sold, to the cute fella in the tan and ebony mask.
(( Klunkkk of the gavel ))

So,
If we had Jigidi, beer and virions, which one would you pick first?

Up and at'em, atom virion.

They propel the rocket with viruses? Wow those virions MUST be strong!

They were making sure the toxic propellant had dissipated before they opened the door.

I think it took a long time to get them out, because they were inside saying "No mask, no open".

Wonder how long it took those astronauts to calm down after the splash? Better yet, how long did it take the folks who were footing the bill?

Excuse me, sir, madam- exactly what do you do with those billions you've got statched

The Red Queen has spoken.

That would be death.

It was the end of something live.

A giant dragon, Juba you weren't watching what I was watching.

It looked like a dragon from the deck of the boat, and the door was the mouth the guys came out of.

It was cool. ( I missed the splash down)

I don't think it looked anything like a dragon at all. False advertising.

I guess that they needed to be far enough just in case.

It was exciting, from what I could see. I still can't figure out where they were broadcasting from, it made the viewing difficult. All went well, that's all that really matters.

Moving along, did anyone watch the splashdown?

That would not have worked. I just waited.

Better than ruffled down, though, old duck.

And Ian, thank you for not beginning with "Calm down". ;-D

Ian, I would gladly risk an accidental spurring for such an outcome.

Now shake hands, and we are all friends again:-)

Understood and agreed, BB. And most clearly stated; thank you.
My alter egos are tripping me up more and more these days.

I was totally incorrect to glibly read torment and type torture.
Please feel free to immerse yourself in the torment of choice, or not, as you see fit. I've never been comfortable giving orders.

Rob read carefully. I didn't say your question was torture, I said ; "making a choice" was torment. IMHO choosing between 2 desired activities would be self inflicted torment, in other words, an agonizingly difficult task.
The O stands for opinion correct? I was merely expressing mine.

That I am, One glass a day, sometimes none at all.

Sober and loaded for banter.

I don’t drink and text or jigidi.

It's a question, not IMHO a torture...
unless you're a masochist.
Ian seems quite ready for a blissful day.

Why would you pose a poser and then remove the torment of choice?

Don't choose just one if you'd rather not. It's a free country, er, website.

If... "heaven forbid"... we had to choose between beer and Jigidi, which one would you pick?

Me neither, Ian. Come to think of it, hot beer's also right off my list ;-)

I'm weird, I don't drink coffee at all, in any form.

Some actually do that to coffee too.

I have been known to put ice in my beer.

Ian, we can have the warm beer heated if that will help. :-/

No on the warm beer

Sand sandwiches grate on me.

Rob, no, it was better than sitting around the house with no power. At least we had beer.

l think we should honor Sandwich Month.
How about a sand sandwich-
Salted sand washed up on shore by the hurricane-
Which l understand is running with all its might to overwhelm many of us-
Who will lose electricity and wish they had made sandwiches before the storm hit.

Just in case it started to rain frogs?

Last time I was in a hurricane, I went to the outside raw bar.

I also have been in show storms. Not fun.

Juba, I know from having been in sleet storms, and hearing someone ELSE say it's just like shot salt.
No hillbilly weddings in my closet.
Thanks for asking though :-)

If you remember the mattresses you might be interested in Mischka's puzzle today, titled "August is National Sandwich Month".

Is was in Hurricane Carla when I was two. All I remember is my brother stuffing me between two mattresses in the hallway.
How do you know what salt from a shotgun feels like Rob?

Having been in many blizzards, where the snow can bury you in half an hour while you slowly freeze in the 40 mph winds... and some sleet storms (sleet is little droplets of frozen rain. They sting like salt fired from a shotgun) almost as fierce as blizzards and even more damaging to skin, I have a healthy respect for hurricanes. Tornadoes too.
Just like anacondas and African crocodiles, I'd prefer to live my life without ever encountering hurricanes.
Several dozen miles away whenever possible is the motto up here in the Great White North.

Is the Fuchs Park Picnic like the Fyre Festival? BYO everything.

I wish I'd remembered the Park Party was to be tomorrow. I would have posted an appropriate Fuchs Park puzzle, but we can return to the Summer Has Been Cancelled, if Spaceman John doesn't mind.

I'm all in favor of a Jeanisms Collection.

I am afraid of hurricanes, but I'm staying far far away from blizzards!

It seems Rob has never been in a hurricane -
there are degrees of wet and WET and W E T and W. E. T. etc.

as to Jeanisms l charge exponentially. l do not accept virtual money.

Good idea in view of all that's going on- peaceful protesters might have crashed- not that they are not welcome but with distancing and all...
Strange times.

Thank you Mischka- if anyone asks me l will tell them.

@robf reminds us, " @Juba1010, that park and its hostess may not be available on Aug 2 because of the imminent arrival of hurricane Isaias."

We'll get a lot of rain, and I might lose power, but the hurricane isn't expected to come through Miami. :-)

@morepiecesplz -- The puzzle about the Fuchs Park Party is here:

or Goggle "jigidi summer has been cancelled"

465 comments as of this writing.

I’ll put it in an ice bath.

Be sure to thoroughly chill your clam nowd for the party... we don't want anyone getting food poisoning...