Just popped in to say 'Hello' 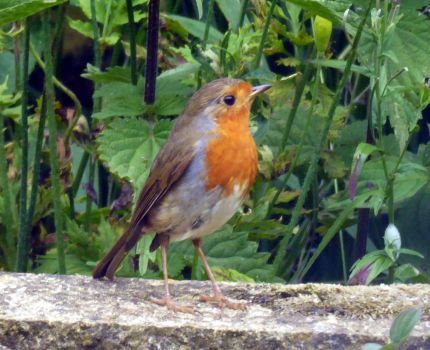 After the continual presence of Robins in the garden for the whole of last year, sightings this year have been few and far between. Perhaps I simply haven't been looking at the right time, but I was pleased to see this smart-looking fellow turn up for a quick feed. He didn't stay for very long, though :-((
Created by WillTapper Published 20 June 2018
Why this advertisement?

I think you're right, but I've never seen one - they range somewhat to the south of where I've lived.

Historically, the European Robin was once included in the Thrush-Flycatcher family, but over time, was reclassified and now sits in its own sub-species. It was also known as an 'Old-World Chat', so I suppose that you might consider your American Chats to be the Robin's nearest transatlantic relatives. If you changed the breast feathers of the Yellow-Breasted Chat to red, you could well mistake it for a Robin. (But please don't try it!!! :-)) )

Sure, our robin is a "great bloody thrush", closely related to the English blackbird. What's interesting, though, is that I can't think offhand of an American bird which might be similar, or related to your robin.

Thanks, dondi. Bit different to the American Robin, eh?

Weather here in Catalunya is also...different. Spring was late...summer was late and so maybe the birds are late too. Hope they turn up at your place soon ;) Will

What a cutie! Glad you were in the right place at the right time with your camera. :-)

You could well be right, bluebird. Weather patterns do affect the bird populations. Our Robins are both resident and territorial, and usually stay in the same area all year round. However, a recent survey did find that some Robins move about the country more than previously thought, and as 'my' pair had a couple of chicks last year, I expected those to have moved on and the parents remain. But what do we mere mortals know?

I think it's the weather. For several years we've had our American style robins (quite different from yours) stay with us through the winter. Last winter nary a one! Now they're back for the summer, but it seems fewer than usual. I recently saw a cedar waxwing, the second one I've seen in 20 years, and several baltimore orioles where usually I see none or maybe one. Either the weather is confusing them or they know exactly what's going on and they're behaving differently as a result.

Thanks, Beachpuzzle. I'm just wondering what happened to all the other Robins, including the chicks, which were around last year. They are very territorial, so I would have expected at least the original inseparable pair to still be here.

Such a pretty fellow!

My pleasure, Nicky. I always try to have a camera to hand, as my previous postings can testify. Birdwatching has been part of my life for as long as I can remember.

Thank you for sharing, Will. You were lucky to have your camera at hand! Smart little guy..