Norse Mythology Fanfiction - Movie Posters That Get Straight To The Point 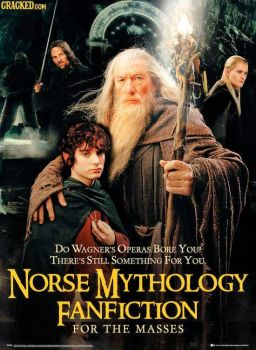 Movie Posters That Get Straight To The Point

"Don't you hate it when you have to go and watch a movie to know what it is about? If only posters stopped playing coy, you could save yourself so much time.

Well, no more. As a service to the community, we went and redid a bunch of movie posters, so now they tell you what their whole deal is. There! Now you can quickly decide if you want to watch the movies or not, or even discuss them online without wasting your time enjoying them. You're welcome."

You know me too well. You too huh?
My son has learned to just call them "moments"; he & his friends have 'em too.

Thet're not sins. They're senior moments. :)

The sins of the Jimez continue with the robf. :-(

OoPs. Although my statement stands, what I shoulda said was
You're the best bestest too Jimez.

Who is this Juba to whom you are speaking?

You're the best bestest too Juba.

Jimez, looks like you were writing to Mischka but you tagged Mishka instead. Good thing #1 came by.

Their opinion shall not pass -- I'd've given you credit for that! :))

Dr. John was my pediatrician.

I Googled a few different phrases, but I'm not finding it. :-( @jimez

@mishka...No on the mom question. It was a quote from a 70's song, cover of the Rolling Stone, I believe Dr. John. Google it, You'll love it.

(( practicing a pitch for Gorilla Glue ))

Jim, did your mother get rid of your old comics??

Thanks Hoff.
Of course.

Only if taking a moonshot (not unlike shooting the moon).

If there is a working still on the moon (was not last time I was there), then, sure, a lunar mag.

I've always wanted my picture on the cover of a Cracked magazine. I'd buy five copies for my mother. :)

Did someone say moonshine?

I will be happy "to favour us with some more Cracked content" -- when it's likely to appeal to lots. Thanks, Rob.

Let the moonshine in! I think that was the next line, right?

Ah yes. Wonderful memories of Hair.
Every morning in the mirror brings back memories.

Let's not dwell on the remote chance of anyone ever trying to outshine Nixon, either.

I thought Cracked was like High Times, but for Crack.

I subscribed to Mad magazine in high school, but had to let it lapse after a couple of years as university pressures mounted. When I saw Redbutton's ad on Jigidi a few days ago, showing an orangeish head with an Alfred E. Neuman face on a t-shirt, that was the end of any hope of being serious or even concentrating for the rest of the day.
So I have heard about Cracked, and appreciated its different take on the abundant absurdities of the culture of the day.
(Wow that sounds stuffy... OK print it. Why reword, when stuffy is what the publisher wants?)

Perhaps Mischka would be kind enough in the months ahead, as the first wave ebbs and swells, to favour us with some more Cracked content?

I like Cracked's Photoshop columns (which they call Photoplasties; sometimes they send out a call for the users to contribute, and winner gets a hundred dollars), but also their Weird World section. It covers urban legends, false stereotypes, dog and cat heroes, fake news, creepypasta, strange funerals, Lizzie Borden and other murderers, videos with the most real-looking faked ghosts, all kinds of fun stuff. Tons of stuff about Presidents and other heads of state. And lots and lots of dick jokes.

Nixon will never outlive them.

Cracked has been up for decades, Rob, so I'm sure they've tackled it at some point. They tackle *everything*, usually with accompanying dick jokes.

Their opinion shall not pass.