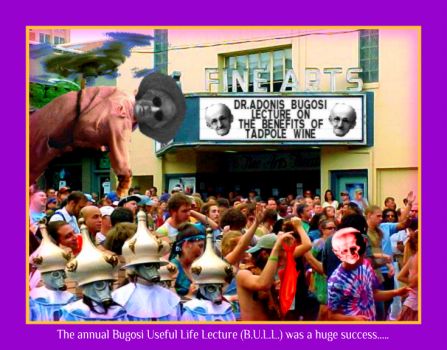 This year's Bugosi Useful Life Lecture was accompanied by a huge street party, which proved to be so successful that everyone totally forgot about the lecture, and experienced first-hand the benefits of Tadpole Wine........Dr.Adonis eventually joined us, after three hours of talking to himself......
Created by lelabugosi Published 18 September 2015

Shoe time! The show-shine boy will shoe us how he shines the showes....

Or, as Ed Sullivan used to say, "It's a really big shoe tonight!"

The shoes in Roger's Emporium are very nice also, because he stole all the shoes from our shop in Redondo Beach, California, while pretending to be interested in me!

Oh, Desmondina you are such a cutie.....your face looks as smooth as a baby's bottom!....you have probably read in the Bonga-Bonga Times that coconut is all the rage....well being a cutting edge nurse that is what I use....I whack a coconut in half and immerse my beautiful face in the coconut water for at least a half hour.....you need to use a snorkel breathing tube.....

Lectures and shoes... interesting... perhaps it's worth giving a chance... Are they nice shoes?? ...

I bought a lovely Pollocks tablecloth at the hardware store. You never have to wash it because all the spills just add to the design. I love it!

I have a beautiful set of second-hand speckled curtains for sale, at my hardware store, should anyone be interested.......(I call them "Pollocks")........

Well, I certainly enjoyed the lecture. The nice doctor even supplied a curtain rod for me to sh... I mean sit on.

Well, I would certainly prefer to buy my shoes here than at Slimy's Emporium!

He also talks in his sleep......I have been fortunate enough to hear many a rousing lecture delivered by the dozing doctor.......

He is truly ambidextrous.....trying on shoes and talking at the same time....what a guy!!...

What a great idea.....trying on shoes while you're listening to a lecture....

I think you are all jumping to conclusions ........ The lecture hall is actually a shoe shop, belonging to Mr.Arturo Bugosi, who is known for his refined manner and goes by the name of "Fine Art".......

Maybe the Gnob-Gnobbers have a clothing display inside, as well? Tie-dye fabrics MIGHT be considered fine arts. Maybe. Possibly............ Oh, I suppose not.

Wrong place ? It is written very clear : in top of the head of dr. Bugosi ! I fly extra so far to visit that Event ......grrr

You're looking in the wrong place, gerdje...certainly not here! ;)))

I think they spend too much time ''consulting'' one another to practice.

As long as they're practising on someone else.

I've always said: theory is good but practise is better....

Well darling Doctor....never fear.....a GREAT nurse is always prepared.....I have a couple of sharp paring knives tucked away in my nurse's cap.....

Gweat Scott! We awe wunning out of scalpels!

To think that you can't talk straight when we are together makes my heart tremble and my hands shake......oops I just dropped that scalpel.....

I always love "to help out"!

Once Roger stops at the edge, instead of following the lemmings, who's to say he can't be ''helped'' over the edge?

Doc ACB.... what happened to your speech impediment? Or do you keep forgetting about it?

Oh my dear Dr. Bugosi......how thrilling it is to hear you express your deep thoughts......whether you are talking about how to use laughing gas during surgery or.....lemmings....I am always learning something new!....

A futile thought, gemmeee, I'm afraid. Roger's No. 1 interest is Roger and when he got near the edge of the cliff his self-preservation instinct would kick in and he'd save himself. Still, it's a good idea and one that decent people everywhere (or at least in Jigidi) can enjoy for a few moments of imagined delight! Toodle-pip, you creep.

As for you "Dr." A.C.Bugosi, the world would be a far, far better place if your parents had given rise to a misconception.

You'd be knowing about rich, lelabug. Look at the way YOU dress, just for lounging in the evening. You're the rich one. Or at least you married money, and live off the distinguished and desirable Mrs.B as if the wealth were your own. HUMMPHHH yourself! And HUMMPHHH again!

Could we convince Roger that he's a lemming...somewhere near a Norwegian fjord?

Lemmings have become the subject of a widely popular misconception that they commit mass suicide when they migrate, by jumping off cliffs. It is in fact not a mass suicide but the result of their migratory behavior. Driven by strong biological urges, some species of lemmings may migrate in large groups when population density becomes too great. Lemmings can swim and may choose to cross a body of water in search of a new habitat. In such cases, many may drown if the body of water is so wide as to stretch their physical capability to the limit. This fact, combined with the unexplained fluctuations in the population of Norwegian lemmings, gave rise to the misconception.

My shirt was indeed a gift from the Gnob-Gnobbers........
Everyone enjoyed the concert, though it threatened to get out of hand at one point, as numerous people were shouting "Get out of the way, pointy-eared hippy!".......I can only assume that someone was blocking their view.......
precious-pebble.....that was round the corner.....
okie-thingy.......Yes, Tadpole Wine leads to enlightenment......

I think one would benefit from partaking of this brew before attempting this puzzle. A glass or four certainly helps in *interpreting* the puzzle.

And here I thought I was in the line-up for The Pirates of the Caribbean!

I bet the Gnob-Gnobbers have a nice clothing store. It looks like something they'd produce.

By the way, lela... where did you get that cool tie dyed shirt?

Oh how I love a street party.....and this one was so great....there are those wild and crazy guys, the Gnob-Gnobbers, front and centre as they always are at every party.....and lela with his tie-dyed shirt from the 60s.....notice how everyone is facing in one direction.....probably heading to the tadpole ponds where they'll all jump in......huzzah, huzzah.... sorry you missed it, Jim.......

Tiny-Coloured-Bonnet......Uncle Bluebottle was singing, on the main stage, that famous song "If you love Bonga-Bonga, stick your finger in the air"........I was simply obliging.......
Slightly-Surreal......Strangely enough, that's what all the party goers said, also, as well, too......

Ha Ha! Love your shirt, but what are you doing with that finger?