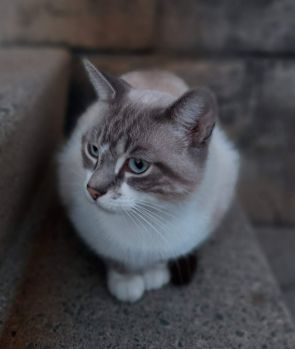 He "belongs' to my neighbours but has chosen to live with me. They named him Avalanche but I re-named him Tinkerbell as when he first started hanging around with me and mine he wore a collar with a little bell so I always knew when he was around.
Created by katiedog Published 6 October 2020
Why this advertisement?

You're more than welcome!!

He did go home after Christmas for a few months, took him a few days to re-adjust when he returned!! He was pretty easy. Moggie was my nightmare who took astronomical amounts of patience!! Only cat I have ever met I actually couldn't stand but I refused to give up on him and I was rewarded... but his story will come later!!

Thanks for your intro to Tinkerbell and his intro to your household. It sounds like you and your crew were very patient with him for a whole year and now he belongs with you.

Ya, he's a cutie! Was a little bugger at first...would beg to be petted and then as soon as you put your hand out he would attack you! He would also chase the rest, or his favourite was to walk by one of them and give them a swat as he passed. He was not too popular to start with. He doesn't come up stairs and sleep with the rest, but he's happy curled into the cat bed. After a year, he will finally purr a quiet little purr for me.

He's gorgeous! And he gets along with you and your crew. Thanks for the puzzle. -Patsy