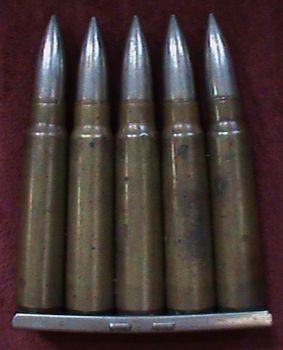 From my collection, any ideas?
Created by OldManMontgomery Published 16 July 2017
Why this advertisement?

Much, much later (Jan 2021) I review this as Miss Joan just replied and encouraged me. I will do.

I also have to amend something. Viper is correct.

I was considering the rifle I have rather than the larger picture. The round shown is indeed the Argentine round, but it is exactly the same as the Belgian round of the same era. Indeed, the rifles are the same except for some - more or less - cosmetic differences. Mauser of Germany contracted and built the rifles and FN (Fabrique National) made great quantities of cartridges for both nations and many other firearms as well.

I'd almost forgot about this puzzle.

TFS, the picture of these bullets.

Thanks for clearing that up for us!

I should have ended this much earlier. They are from a Mauser designed rifle, the 1891 Argentine rifle, caliber 7.65x53mm. Ballistically, it is very similar to a .303 British round.

It was designed around the turn of the last Century (released in 1891), so it is rather 'similar' to many of the rifle cartridges of the time.

It is a rather 'odd' round, which I suppose is some of the appeal to me. Quite useful for most situations involving a rifle.

By the way, the British rifle is a "(James Paris) Lee - (Royal Small Arms Factory [at]) Enfield".

I doubt that they are 7.92/8mm Mauser as they don't appear to be old enough.
303 is out as they are rimmed cartridges.
I still stand with the 7x57 FMJ rounds which were the most common European round in WW11

wombatt - the British .303 rounds look similar, but the stripper clip is very different.

Maybe for a Leigh Enfield .303

I've had no luck identifying the clip, although I've found lots of similar ones, just none with the two dimples close together like that.

Badgerfog, sorry to rain on your parade. The M1 (Garand), the U. S. full rifle in caliber .30-06 took an eight round 'en bloc loading device' (sort of clip). And I'll give you the FN stands for "Fabrique Nationale". Frankford Arsenal is "FA". However, a casual look and this cartridge looks quite similar to the Garand - .30-06 - cartridge. You are in the correct time period.

As my old memory serves me, it could be from an old M-1. The FN, I think is Frankford Arsenal, which also leads me to think M-1.

Can you show the headstamp?