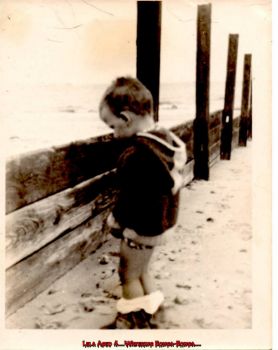 As promised, here is the unexpurgated photo of an innocent me in bygone days.....
It was taken in a seaside resort of Bonga-Bonga, known as "Blackpool" and I was trying to re-christen it as "Yellowpool"...............
Created by lelabugosi Published 14 November 2013
Why this advertisement?

It looks like there's something more than just the hood that's pulled down...

This is the hat you need.

Oh dear....oh dear......my sordid past appears to have hit the headlines again!

Love it Lela! I'm guessing your ears didn't grow in till you reached puberty. lol.

This is just too cute for words!!!

you're all way too noizy

glad it isn't my powder room they are all in, I'm off to bed,too much excitement.

Hair of the dog, anyone?

who's eating all of those wings and where are you putting the bones?

I think we need more chicken wings. This last batch is gone. More wine, too.

don't let any of that lot in, or Kaleidoboy as I would have to stuff cotton wool in his ears

YEAHHH!! A ladies' party in the ladies' room!! Let's have the chicken wings and some wine/beer ad libitum - MYYY WHAT A SESSION!! Come on girls!!

OK I'll start, I'd like to batter and fry young Henry but to 'have' in any other way............well I'm still awaiting Prince Charming and I don't meant Prince Smarming. Used to rather fancy that numbers guy but he must have gotten wind of it and vanished

Suddenly the waters around Bonga-Bonga seem to be rising. Yes, definitely rising.

Can we get an order of chicken wings in here please?

What the hell. I'll go. MasterHenry watch my beer!!!!!

I don't need to go. I already know the outcome!!!!

Wait for me ladies!

Right on, girls...I already know who I want to GET for afters!

I'm with you, Hanne. Conference time.

Right now I think we should withdraw to the ladies' room, ladies, just for a short conference......

who do you think deserves us?

Exactly, why else would we do it? - have a giggle or too about some hunk or about some slimy thing....

It's always a LOT easier to gossip about the men when we go to the ''ladies'' together.

Actually P-squire, it's rather interesting what you mention!! Indeed you are right!! Funny - isn't it??

After "The Housewives" have finished with Dodgy Roger you might not have to worry about that, psquirt!

ThomasCat, yes ...
With men going pee is more of a group activity and less of a private matter

Boys have it so easy!

Bill Clinton stepped out onto the White House balcony one winter morning and saw "Bill is a fink" written in yellow in the snow. Furious, he called in the FBI Crime Lab! Later that day the Director of the FBI came to him and said, "Mr. President I have good news and bad news." Bill said, "Let's have the good news first." The FBI man said, "The pee belongs to your Secretary of Defense, Les Aspin." Bill exploded, "That's the GOOD NEWS? What's the BAD NEWS?" "The handwriting is Hillary's."

And up north there's the well known admonition, "Don't eat the yellow snow."

For they shall inherit the sand. Halleluuuuuuuu!

Isn't that funny? My sister, Sister sister Also too did exactly the same thing..........last year I believe it was.

A great photo, made me smile as my sons did this also.

Four years old and not housebroken???? My collies are always housebroken by 12 weeks old!

And I see your ears have not quite matured either....do they start growing, also, at puberty?

somewhere I have a photo of my late son Jonathan aged about four on the same beach doing something similar. I warned him the snipper-snappers would come but he couldn't wait. you are very cute, what happened did they hang you up by your ears?