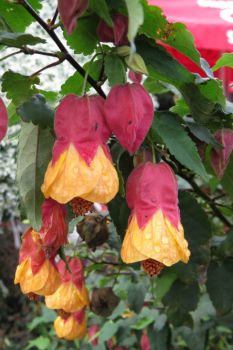 Taken at Tamborine Mountain Village, Queensland this morning. Tamborine Mountain is directly behind the Gold Coast and is high, cool & covered in very tropical vegetation.
Also known as Abutilon - they are in the Hibiscus family.
Created by robryan Published 1 June 2014

What beautiful flowers!! They look like bells!! Thank you Rob.

It's a great looking plant Florrie - thanks!

They sure are Patti - thanks!!

Thanks Mimi - I really liked them too!!

The drops of water were from an early spit of rain snooker - thanks!!

That makes quite a few of us Ami - I thought they were really different!! Thanks!

I've never seen anything like these before, thanks Robyn!

Like the drops of water on them. Lanterns for sure. :)

I'm with Patti, what neat flowers! ☺

It was probably in the same family Shirley - sounds like it's a big family!!! Ah! That's interesting - it's a beautiful area - but the roads are a bit steep!!!! Thanks Shirley!!!

I had a plain red one, I thought to be a Chinese Lantern, but it was no where near as nice as this one, perhaps the one I had was something else, Thanks Rob.
Rob, We lived in this area some years ago.

Ah! Thanks Janet - I'll make a note of the name!!! You learn something new every day here:))))

Thanks Barb - they were rather eye-catching!!!

Like the others said it is called Abutilon and they are so pretty and unusual :)
Thank you Rob :)))

They are called Abutilons, Rob and are related to Hibiscus. I grew one once, many years ago and it flowered and then died! Probably too hot for it! Hugs, Janet

That's what I thought too Beekay - I've never seen them before either!! Thanks!!

Thanks aerovka - they are beautiful!!! I translated your comment from Czech :)))) Thanks for commenting!!

They are so unusual they don't look real :-)