My other Phlox in the back garden. 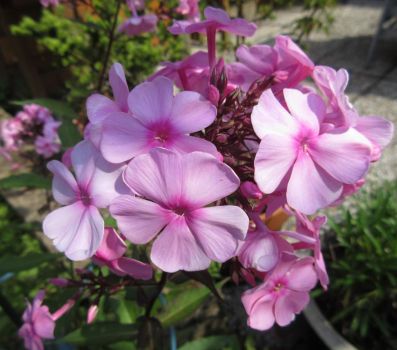 Sitting in the border in front of the back rockery (next to the spot where the Oriental Poppies grow which are all finished for now). These are also planted by my hubby many years ago. They are different from the other Phlox in the bin planter, but smell just as nice! ☺
Created by Impie Published 25 July 2021

Thank you, Kathie, the feeling is mutual.

The plural of male friend in Dutch is 'vrienden' and female friends are 'vriendinnen'.☺

In Holland we call our grandparents Oma and Opa. :-))
Our parents we call Mamma en Pappa ...(with the first 'a' pronounced like the a in dark)

I have a 50-yr friend, met in 1972, one child, grew up w/mine, called his German grand mother "Oma" so one day I asked, ''and what is your Grandfather?" I will never forget his answer: "Opapa" I loved it, just beyond cute, I can close my eyes & there Is that
moment. Life is made up of those moments, like my Todd & his bird, the "Feed Me"!

Aww, thanks, Kathie. My oma was a wise woman, often a bit harsh, but she meant well:-))

Thank you, Impie, your words help, even so many years later....quit halfway. I had to find out who I was, even my boys said they loved the new me! ha!

Yeah, Kathie....it's hard to loose the ones one love, but then again "love also is 'letting go"....
I'm sorry you didn't make it in your marriage. My oma (dad's mum) used to say: "better quit halfway, than get lost all the way". ♥

A year August 23, he 'flew' into my life! 2-oz filling the 4 oz hole Max left in my heart.
How we love them, huh? In the 70s our dog went out, came back in 10 min, neighbor called, both my rabbits were dead, one in her back yard. I cried for two weeks. Thumper & Snowball, black & white. It's the contract we sign when we take them on, as I've said before: C S Lewis' wife said "the pain then is part of the happiness now".
I am half-way thru the book of their love; "Becoming Mrs Lewis" What a read..oh my.

Yes, your love for Andre`will never ever end and probably still grows. Bless you. I just bought the MP3 Hauser Plays Morricone, playing now, & never ceases to make me think of the two of you. No hard copy CD available; it plays on my computer Amazon cloud. I was married in 1966 @ 22, John was 24. We didn't make it, ended 1984. I'd love to have had what you had; getting late for finding that ;-) ♥ oh, this music....

Thanks for the link, Kathie. I will watch it in a later moment.

In my wedding photo I WAS very young (20) and André 24. He's also often taken for a younger person. But when his health problems really started to get to him he got a 'worried' look and started aging faster too! But....I always kept seeing the young André I fell in love with and I think my love only got stronger then.....he's no longer here, but my love for him still is! ♥♥☺☺♥♥

Thank you for your story how you got your eye set back in 2003. I can imagine how you must've cried when your cat Kissa died. I've cried my eyes out when our cats died. I've often wondered how one can produce so many tears (and for a long time too!)
I'm not crying now either eventhough I'm always emotional when it comes to mentioning my hubby or my cats! ☺♥☺

That movie, Miracles From Heaven, is true; here is the synopsis & MV trailer:

Mar 16, 2016 · MIRACLES FROM HEAVEN is based on the incredible true story of the Beam family. When Christy (Jennifer Garner) discovers her 10-year-old daughter Anna has a rare, incurable disease, she becomes a ferocious advocate for her daughter's healing as she searches for a solution. After Anna has a freak accident, an extra-ordinary miracle unfolds in the wake of her dramatic rescue
**************************
I DO believe you look very young, based on your wedding photo! Such a sweet face!
We know the joy of being taken for younger & esp when I am older (7+ yrs?) & am taken for 55-60! Woohoo! Enjoy it and may it last a lifetime for both of us!

It was the crying over the firefighter movie that set my eyes back; I bawled, so my eyes were swollen & worse in the morning. Like I said, Cold packs again! Same thing as when I had it done in 2003 & my Cat died that week! Oh man, Cry! My Kissa (kee-sah,
Finnish for cat, I was dating a Finnish mailman I worked with!) Can't Cry! Fine today!

Thank you, Kathie. Yes where has time gone...our wedding was 18 December 1972...48 yrs and 7 months later in my head I haven't changed much, but my mirror image tells me something different! LOL I remember when my aunt (dad's sister) came to visit me in 1996 when we had just moved into my present home. Her husband died 10 days before my mum in June 1995 and we went down to memory lane. We sat down in the garden and we were looking at photos in my wedding album and she said: "je bent hier nog net een meisje" translated: "here you look still like a young girl!"☺☺
As I get older I look more and more like my mum (ask Faye☺☺) but I also look a lot like my aunt. My aunt was best friends with an older couple who live further up in my street. They organized her funeral service in 2000 as my aunt didn't have children. It was actually there when I met them in person for the first time. Many years later we'l still occasionally bump into each other ...in the supermarket or passing in their car or on their bike....they don't have any problem recognizing me. They've told me I look so much like her!☺☺
All around the world we all have a look-a-like or even several of them.☺

My back is less hurtfull, thanks for asking. That eye healing set back you mention ....what happened? I hope your eyes are OK soon!♥

I've heard of near death experiences, but what a story of that little girl and the Hydrangeas in that movie. I bet you had a hard time keeping it 'dry'!

Oh, I remember Andre` in your wedding photo; what a gorgeous couple, he was so handsome & you were just adorable! i am guessing you have not changed much! I can totally understand watching a talk show where a man looked like your love, as I saw in my movie. I set my eye healing back, for sure/cold packs again. Movie evokes a great appreciation of those who fight those fires to save us, as happening now, out west.

How is your back doing today? I was surprised to see you on line but glad because it
meant you can sit up for a bit. We in VT have smoke in our air from the wildfires out west, to the point where my younger son sent me a link to an air purifier on Amazon!
I think it will pass, but I am not going outdoors & windows are closed. Carbon mon-oxide was 138 in their house/machine helped/much worse outside, no bicycling today.

I wanted to Tell you - caught the end of a movie today after the news, about a little girl who fell into a tree, 30 ft drop, & while unconscious, found herself in a field of flowers with a 'bright light' that told her she 'could not stay', had to return; but she moved her hand along the top of many hydrangeas & each blossom, in turn, flew up into the air as a tiny butterfly, pink or blue! I thought of you & your phlox, they could fly, too!

I see, I can't seem to find the patience to sit and watch a movie. Episodes of series I can handle. The movies we get on TV are old and I've seen them multile times in the past. Lots of people around me have Netflix, but not me.☺☺
Thank you for the link to the trailer though, Kathie. I get it's a very moving movie especially when you see a resemblance of your son.
I once watched a Dutch talk show where a man sitting in the background looked so much like (younger) André. He was often very prominent in the picture...I couldn't get my eyes of him. If you'd ask me what the talk show was about....I honestly wouldn't know! ☺☺

@Impie - Cinema Paradiso is an Italian film from the 60s, with a Morricone score, like Once Upon a Time in the West. A little boy learns to run the projector..very good MV.

''Only the Brave'' was a true story of a wildfire gone bad in Phoenix Arizona, the Granite Mountain Hot Shots fire crew, 2017 movie of a 2013 fire started by lightning. Like I said Josh Brolin looked So much like my Todd in this movie, it doubled my tears...
https://youtu.be/EE_GY6zccqc This is the trailer, not the ending, which broke my heart.
...thank you for listening.

Thanks, Ella, The flowers form a kind of 'ball' and each flower lasts a few days in normal weather circumstances. They're fragile especially in pouring rain.
The creeping Phlox bloom in an earlier period of the season, but also last a few days per flower. This year my creeping Phlox (the pink ones) gave only 5 flowers, but at least it's more than last year. The purple one didn't bloom at all. It's sad, because I have photos in my old files where they covered a huge part of the part where they were sitting!

These are just a pretty as the ones in the bin, but are more pink. How long do these bloom as compared to the creeping Phlox?

Thank you, GG. I'm glad you enjoy both. These kinds Phlox have started blooming since last week (not much later than usual) they are different from the Creeping Phlox I posted some time ago, those have given just a few blooms for a very short time!;-))

Yeah, Kathie, I hope you've enjoyed winning 'silver' while it lasted?...LOL
I don't recall ever seeing the MV-s you mention, then again I don't watch (m)any movies lately. There are days the TV isn't even ON...or I'll just watch some news and then switch it off again. So many channels and nothing on!;)

Hahaha! 2nd in line to the throne; but a few could take us out, still! SO pretty, though, I can just Feel their velvet texture! Goodnight, Impie! I watched a MV today, "Only the Brave" with Josh Brolin, true story about wildfire fighters; super-sad ending, I cried...
In that MV, Josh looks like my oldest son, who was a volunteer firefighter in his teens. He'd come home covered in black soot, smelling so bad; God love him.
Have you seen Cinema Paradiso? I enjoyed that 2 nights ago...no tears, little boy cute!

How special that these Phlox (in both photos) are still blooming, and look so beautiful. As always, I enjoy seeing your garden and special flowers, Impie. Thank you!☺

Enjoy your moment of fame, Faye😉😉😉

Thanks, Kathie. I don't mind either, you're one second faster than I was! :))