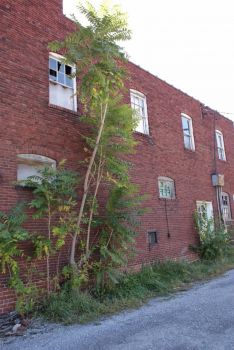 Created by chickiemama Published 4 November 2012
Why this advertisement?

Thanks Hanne. bradjan, not sure what it was used for. I was inside yrs. ago when it was a sort of antique/resale shop. There was a big room completely tiled which I was told was a community shower. Can't remember what the building was used for back in the day.

Really not a bad looking building. Do you think this is an apartment.

Yes, I like the tree too, but somehow it must be a bit younger than the building!! Thanks Sandy!

Hi JanetJane. I forgot about that tree. Yes I did see it a couple yrs. ago. I will have to check it out again. I just looked in my flyer and it said the tree is over 1000 yrs. old! Hard to believe.

Hi Chickie, speaking of the Cache River Cypress Swamp..A couple of years ago, I had an Illinois calender showing unusual sights In the state. I remember there was a photo of an old cypress tree and the caption said it was THE oldest living thing in the state! I thought that was very impressive...many hundreds of years old...unbelievable, really AND IT LOOKED IT! AWESOME! Have you seen this tree????

Chickie would take just about any brick in the wall. If it's a stone, she wants it!

That's the way I look at it shirley. I will take all the free bricks I can get.

Lots of bricks to salvage her, many a brick paths in this building.

Who are you and why did you call? What did you do with the chickster?

I don't know, what are you talking about?

Look in what young lady?

And typos for dummies sounds like a great title morris.

With CRS, you'd forget to look in it anyway young man.

Typo's I don't need no stinking typo's I have more then nuff for one person and then what would pumpkinhead have to do if I get them all right?

Another sideline writing the book of typo's. What shall we call it typo's for dummies! We don't want tu wreck the buildings tex we want tu be able tu resell some of the materials!

It's sad so see so many old buildings around. A lot of them are factories or stores that have closed up or moved on. Every town seem to have their share anymore.

Morris, I knew what you meant. LOL We all could write a book on typos!

Thank you JanetJane. There might be a Jigidi outing next year, the last week in October. Many have said they would like that. Would love to have you come down. There is also the Cache River Cypress Swamp (near Cobden where the peach orchards are) and Ferne Cliffe State Park. They are both wonderful in the Spring. There are so many wonderful parks in the Shawnee National Forest and many haven't seen yet.

When you savages get your company set, I'll contribute. I'm good at wrecking stuff.

I had been wanting to comment on your Garden of the Gods puzzles but couldn't seem to get to them in time..It was wonderful to see some of the breathtaking scenery again. We had gone there in 2008 ( My boyfriend, at the time and I) Ihad read about it on-line and so we decided to drive there in late October...It was pouring down rain the while way there and back. But we got our umbrellas and went to certain lookout areas..but the rocks were too slippery to do much hiking..yet we were awestruck with the beauty of the G of G..and we certainly had hoped to take another trip to the area again..on a dryer day, of course. On another trip I went with some friends to Cave in Rock...and that was pretty cool as well. And sometimes, some teacher friends of mine and I go down to Southern Illinois to buy fresh peaches , but I didn't go this year...And of course, Pere Marquette State Park on the west side of the state is one of my favorite places to spend a weekend...You are lucky to be so close to so many neat natural scenic places! So I just wanted to thank you for the wonderful trip down memory lane for me by showing the Garden of the Gods..It is like the best kept secret in Illinois!!! Only now the secret is starting to get out!:)))

I noticed the tiles on the last picture. And I meant salvage, or did I?

There ya go. There are some pretty interesting tiles on the front of this building.

Like the tree!! Let's start a savage company chickie!!!