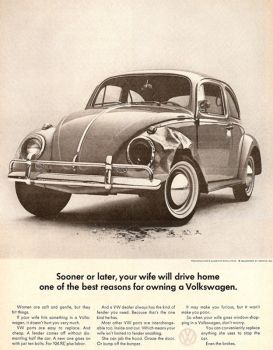 So, is this why the last Beetle rolled off the production line this week?

A friend of mine blew up his ford truck engine. He said “it came with oil”. :-)

Wow! Hard to believe....no way would an ad like this be acceptable today...

Sexist and stupid as well. It doesn't take into account the cost to repair the other car or that people get injured in car wrecks.

Very sexist, and would never be allowed today, or even in the past 30 years.

And yet I have to add that my older sister's first car was a used 1966 VW Bug similar to this one. She never checked the engine oil, and destroyed the engine in less than a year. At the time I was driving a 1967 VW camper van, and she asked me to look at it to see what was wrong. Finding no oil on the dipstick I asked here when was the last time she checked the oil?

Her response was she didn't know that she had to do that, and why didn't someone tell her about that?

Wow! Sooner or later, your husband will hit something with his car, too.

That is soooo bad! And we used to put up with all that sexism without a thought about how demeaning it was (is).