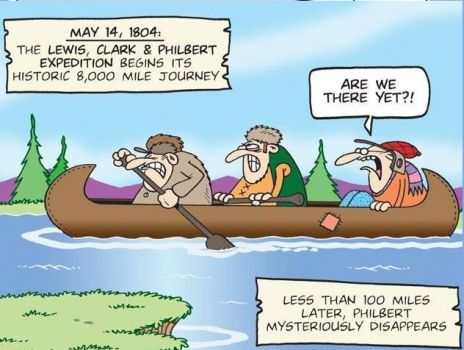 Amundsen was the first to reach the South Pole, first to traverse the Northwest Passage, AND first to cross the North Pole. The previous claimants to that fame had all either badly navigated or lied about their positions and had actually failed in the attemps, the closest falling short by a hundred miles. And Amundsen left nothing to chance. He carefully planned and prepared for every eventuality.

You may have him confused with actor / politician Roald Reagan.

Oh, I thought it was Roald MacDonald whose name got mis-spelled...

Got this one, too. Mainly because that was the only name I recognized. ☺ Thanks, Bonnie.

The Northwest Passage (NWP) is the sea route to the Pacific Ocean through the Arctic Ocean, along the northern coast of North America via waterways through the Canadian Arctic Archipelago. The eastern route along the Arctic coasts of Norway and Siberia is accordingly called the Northeast Passage (NEP).
The various islands of the archipelago are separated from one another and from the Canadian mainland by a series of Arctic waterways collectively known as the Northwest Passages or Northwestern Passages.
For centuries, European explorers sought a navigable passage as a possible trade route to Asia. An ice-bound northern route was discovered in 1850 by the Irish explorer Robert McClure; it was through a more southerly opening in an area explored by the Scotsman John Rae in 1854 that Norwegian Roald Amundsen made the first complete passage in 1903–1906. Until 2009, the Arctic pack ice prevented regular marine shipping throughout most of the year. Arctic sea ice decline has rendered the waterways more navigable for ice navigation.
The contested sovereignty claims over the waters may complicate future shipping through the region: the Canadian government maintains that the Northwestern Passages are part of Canadian Internal Waters, but the United States and various European countries claim that they are an international strait and transit passage, allowing free and unencumbered passage. If, as has been claimed, parts of the eastern end of the Passage are barely 15 metres (49 ft) deep, the route's viability as a Euro-Asian shipping route is reduced. In 2016 a Chinese shipping line expressed a desire to make regular voyages of cargo ships using the passage to the eastern United States and Europe, after a successful passage by Nordic Orion of 73,500 tonnes deadweight tonnage in September 2013. Fully loaded, Nordic Orion sat too deep in the water to sail through the Panama Canal.
The first explorer to conquer the Northwest Passage solely by ship was the Norwegian explorer Roald Amundsen. In a three-year journey between 1903 and 1906, Amundsen explored the passage with a crew of six. Amundsen, who had sailed to escape creditors seeking to stop the expedition, completed the voyage in the converted 45 net register tonnage (4,500 cu ft or 130 m3) herring boat Gjøa. Gjøa was much smaller than vessels used by other Arctic expeditions and had a shallow draft. Amundsen intended to hug the shore, live off the limited resources of the land and sea through which he was to travel, and had determined that he needed to have a tiny crew to make this work. (Trying to support much larger crews had contributed to the catastrophic failure of John Franklin's expedition fifty years previously). The ship's shallow draft was intended to help her traverse the shoals of the Arctic straits.
Amundsen set out from Kristiania (Oslo) in June 1903 and was west of the Boothia Peninsula by late September. Gjøa was put into a natural harbour on the south shore of King William Island; by October 3 she was iced in. There the expedition remained for nearly two years, with the expedition members learning from the local Inuit people and undertaking measurements to determine the location of the North Magnetic Pole. The harbour, now known as Gjoa Haven, later developed as the only permanent settlement on the island.
After completing the Northwest Passage portion of this trip and having anchored near Herschel Island, Amundsen skied 800 kilometres (500 mi) to the city of Eagle, Alaska. He sent a telegram announcing his success and skied the return 800 kilometres (500 mi) to rejoin his companions. Although his chosen east–west route, via the Rae Strait, contained young ice and thus was navigable, some of the waterways were extremely shallow (3 ft (0.91 m) deep), making the route commercially impractical.

thanks but I feel more assured if heard from himself

leonsr43--He's taking hoff a day off, but I know he would be OK with that. He's quite amiable for a sloth.

I so love this one. Brilliant. - Wendy

I absolutely know this one! I've read several biographies of him.

One of these names sounds familiar. I'll go with that one. Thanks, Bonnie.

I'm not sure of the answer to the posed question. However , the first expedition to the North by Northwest Passage was led by the great seafarer Alfred Hitchcock.

I am not sure, but one of those names is calling out to me!

I am pretty certain it was NOT

Did you hear about these new reversible jackets? I'm excited to see how they turn out.