Underground fire from our former coal mine may burn for years. 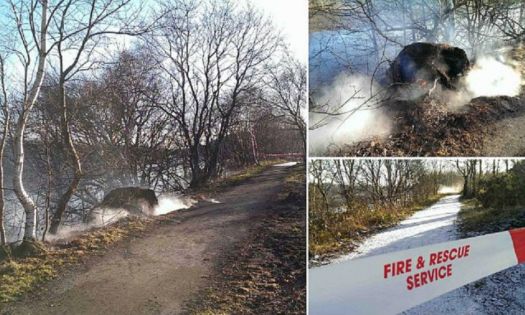 Firefighters have been left powerless, as they are unable to extinguish it. This kind of fire is rare, generally caused by either a coal seam, or a mix of spoils + aggregates accumulated from the coal heap.
In this case it's thought to be the latter - probably from two old ponds that where back filled with spoil. Makes sense, the golf course which runs along to the right of the path (just out of sight on these photos) was built on one big slag heap from the pit, which closed in 1966.
The section of the "Keelman's Way" path has been closed off until further notice, for safety in case of a collapse. There are also trees all along the path that could be burning from the roots which may then fall.
The fire chief said geologists have proved a lightning strike to a coal seam in Australia triggered a fire that is still burning 5,000 years after the incident, and in Ohio, USA, a fire in a coal seam that started in 1884 is still burning.
The last fire of this nature was at an old colliery sight a few miles east in 1993+burned for 2 years.The chief added, the fire could burn for a day, a week or a month. The fire could burn itself out. It's one of the most difficult incidents to deal with.
This is where I often take my dog for a walk, as it's 5 minutes across golf course, from my front door!
Created by Amazonia1805 Published 6 February 2015
Why this advertisement?

Oh my! I've never seen/heard/thought of this before. Thanks for posting, and for the information too.

Just hope it burns itself out - and soon. They've been looking at old ordinance maps+such to try to determine if its a coal seam or just spoil - difference being coal seam can burn for a lot longer. You'd be surprised at how much oxygen there is, trapped in little pockets. But, where we live was all coal mining up until the 1960's by which time the pits had exhausted the coal seams. There were 6 collieries just in our area with a massive network of miles of underground tunnels, which were flooded/collapsed when the pits closed. You can see on the photos the river Tyne - my gran was one of the few women allowed to go down the mine for a little tour just before it was sealed + when she asked what the rushing, lapping noise she could hear was - the guy showing them around simply said, well it's the river! They just had a few feet between the tunnels and the Tyne. My uncle was a typically built miner - over 6ft with broad shoulders+ he sometimes had to work in 18inch tunnels half full of water and shirtless because of the heat/stuffiness. It's hard to imagine. ; )