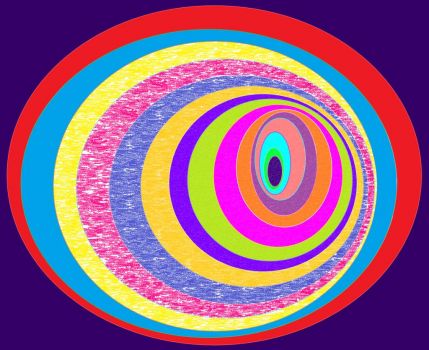 Created by pdevredis Published 8 November 2012
Why this advertisement?

A long, dark tunnel leading to a wonderful, bright, happy place--still on this earth! :-)

Thanks, whatnauts and PJ--it isn't bad, I realize, but it was such a disappointment, after all the effort, not to be able to color it correctly...! Ah, live and learn, Pat--there are worse things that could happen, for sure!

Thanks Pat, wonderful explanation and so fun to read all the comments.
PJ

Might have been an Oops, but it makes for a great puzzle, just-the-same.

What an exemplary and edifying explanation, Mandy! I think you've got it! :-)

Thanks for explaining Pat, I feel reassured. Pehaps its a tunnel and not a hole??? Maybe those of us who saw the eye are suffering from tunnel vision??? LOL :~)

Ah, people, people, people! The center of the swirl is the same color as the background, so it was supposed to be indicative of a hole, not an eye! Get a grip, folks! LOL!!!

I can assure you that not only is it not an eye staring at you, it is an EMPTY hole, with nothing hiding in or under or around it! (Hmmm... if a hole isn't empty, is it still a hole?...). Anyway, we are all safe and under neither threat nor observation! :-D

There seems to be a general opinion that this swirl is hiding something TERRIFYING in its depths....(not that I am one to voice negative opinions).....

Quite frankly the eyeball scared me! I kept waiting for it to reveal some creepy crawly thing hidden behind the swirl. At least that's the only reason I can think of that it took me 2:26 to finish!

Pat, what lovely fun - the mix of textures is delightful and oval shape is nice, but I'm intrigued by the eye. There is no snake hiding in an unseen crater, is there? It's probably only my imagination...
PJ

I see the eye too, thanks Pat - I need to go and read your explanation of Oops - I dont' see any oopsy here!!!

Instead of a black hole at the end of the swirl, I see an eye peeping at me. :-))
Another good one, Pat, thanks.

Thanks, Ardy! As to why it's an OOPS, I wrote an explanation earlier on the small "Swirl Loonified" I posted yesterday under my 65 profile--the short version is, I was trying for a certain effect and messed up my drawing!!! So this is the result--not what I wanted, but okay anyway!

I love it. So why is it an oops? Thanks, Pat. Your swirls are always wonderful.