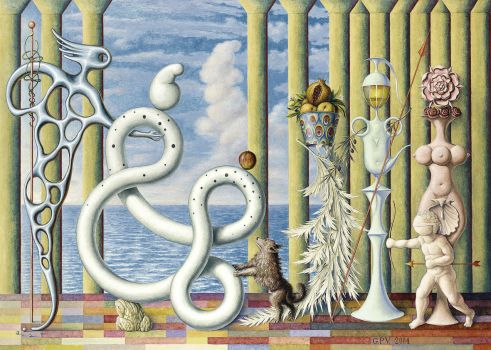 Guillermo Pérez Villalta (1948- ) is a Spanish painter and sculptor. He is one of the most famous post-modernist painters in Spain.

As can be clearly seen, Villalta has executed a very surreal version of The Judgement of Paris. However, most of the major elements are still readily identifiable.

On the far left, is the god Hermes. Hermes has his winged hat and is carrying his staff. Paris is next; he holds the golden apple, is sitting on a rock and is wearing a type of hat has often been associated with him. Paris' dog is beside him.

In the center is Hera. Her symbols include the pomegranate, the peacock (the feather motif is on the bucket) and the cypress branches. Athena, the goddess of war and wisdom, is seen with her helmet, spear and an olive branch. On the far right, is Aphrodite. As the goddess of sexuality, she has displays of sexuality including flowers, breasts, and feminine curves. Lastly, Eros (Cupid) is at Aphrodite's feet. He is holding his bow and arrow; he is also blindfolded.