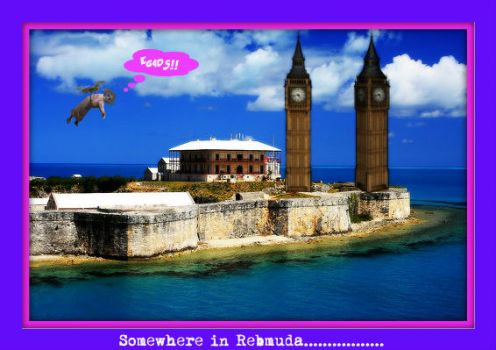 In our attempt to unravel the mysterious mystery surrounding the disappearance of monuments from around the world, we are now one step closer to discovering the identity of the fiendish felon behind these dastardly deeds!.....
Sweetlittleoldgranny has not only located Big Ben - she has spotted a Big Ben clone......in REBMUDA!!....
Ongoing investigations are still going on, as we now have something to go on..........
Created by lelabugosi Published 10 March 2014

I'm at a loss for words.

I lost my temper with the dog this morning.

It's a terrible epidemic of things going missing...I have bought many bundles of rope and am tying everything down....oh wait....before securing the toilet I should have left the seat up...now what!....darn....

I lost an hour over the weekend...has anybody found it?

Yes TC, we have replacement snow now, the dogs are very happy, the heat wave has passed, or was it stolen too?

Well Mat...you were worried about someone taking all your snow....now you will have some snow to fill in those bare spots.....

Good Morning Juneee, is anything missing this morning?

Over here.. on this side of the pond, we awake to find our sun shine is gone... replaced by yet another ice and snow storm :-(

good morning Hanne, been and come back already

sure it wasn't Duckyard Point Robbie? Come to think of it that darned disappearing Daffy Duck was the first thing to vanish, perhaps it was a practice run?

Sorry roerick, we may never see it again but that plane is not missing. It's at the bottom of the ocean, sad to say.

Yes yes .. a very good clue!
We should look to the East!

It was a jolly good time, with good company and a delicious repast. Too bad you weren't invited UncleHenny.....or would you think it cannibalism? As for YOU, you pink-bike Barbie, YOU STAND ACCUSED!!!

Chef John, the Squire and I enjoyed a warm duck breast salad and duck confit finished off with duck cracklings sitting off on the Dockyard point, enjoying the sunshine and listening to the mellow sound of a deep reverberating, scintillating, gonging of a large bell! We looked up and Squire was ready to shoot another large bird with his grenade launcher until we realized it was Sir_W_B flying around like a lost fart in the sky!!!.............Oh what a satisfying weekend!

Perhaps that you had a little too much of the good portwine before you took off?? Good isn't it???

Helloo, chaps and chapesses!
Today.....or was it yesterday?.......Sometime, I flew over Rebmuda and spotted 2 Big Bens, the Eiffel Tower, 2 leaning towers of Pisa, the Arc de Triomphe, 2 Brandenberg gates, 6 Blackpool towers, and hundreds of whitewashed houses...........I think this must mean something.......or maybe not.....

Uncle Roger didn't turn up at the emporium today!

And where's my Daffy, you hoodlum!

Ahhhh yesssss, but CRIMES BY WHOSE, WHO'S, WOOOSE, HOOOZ HAND?

And Gemmy's got her thinking cap on TOO! Your little (well, not little) GRAND SCHEME is starting to crumble around the edges LELABUG!!!

As our investigative investigations are still going on, and therefore, ongoing, I will limit myself to stating that WE HAVE FURTHER PHOTOGRAPHIC EVIDENCE OF CRIMES AGAINST CULTURE!.......Which I shall present tomorrow.....probably, possibly, perhaps............

Weeell, it's certainly not the Rebmuda I remember...I think psquirt might have a point...even though he's usually not the sharpest pencil in the box...and which is the duplicate tower...one does look a little thinner than the other...perhaps this is to create interest in some new diet fad, you know, the "before" and "after" shots...or is it even a promotion for eating at a new restaurant: this is how you look before eating at Bubba's Bistro...after all, Bubba did mention that he's been cooking all weekend with a chef...hmmmmm

Oh I'm so tired I'm off to my bed, hopefully it is still there. Night All

AHA! The Robster's got his thinking cap on! He sees the very same ridiculousnicity of all this that I do! Well that's TWO OF US lelabug, and more to follow. How much baloney are you going to try to get us to swallow? (Actually a couple of sandwiches would taste pretty good right about now, eh Robster?)

Look! Look! Even a crabby Packers fan is mindboggled by all this nonsense! Heh-heh ....... whaddya say to THAT lelabug? Everybody knows Wisconsinites who are Packer fans are good solid people with clear thinking abilities!

Well what can I say?!...........I could tell you that I rowed my 12 foot dinghy to London where my abseiling army mate Phil and I dismantled the ELIZABETH TOWER, dis-connected the four CLOCK FACES and lowered BIG BEN the BELL..........placed them all in the dinghy and rowed home to BERMUDA!!!!!!! and erected the whole programme carefully at DOCKYARD with a cardboard clone to confuse granny and co from Bonga Bonga with the purpose of..............I DON"T KNOW WHAT!!!!

All right, all right, let's get down to brass tacks here. "Somewhere in Rebmuda"?????

Every inch of Rebmuda is known, well documented in photos, drawn on maps, toured by tourists practically every day and LIVED IN by residents. So this little corner of Rebmuda WITHOUT THESE IMAGINARY BIG BENS is ...... is ...... something, something, blah, blah ...... you get where I'm going with this.

Bugosilanders and Bonga-Bongans, I ask you, what is this man UP TO? Is he some kind of INSANE DEVIANT or some kind of CRIMINAL MASTERMIND? Does he have HELP in the person of some mysterious HELPER? What about Sweetlittleoldgranny? She's always at the scene! Is she IN ON IT? My mind is reeling (wreeling, realing, reiling?) with DOUBTS AND SUSPICIONS. OH MY!

Well, whoever is behind all this, they're teleporting, duplicating,.......and SHRINKING monuments!!.......

Two Big Bens??? Does that mean we have double dongers now??
I believe that's what inside the part Robbie calls the bells that are Big Ben.