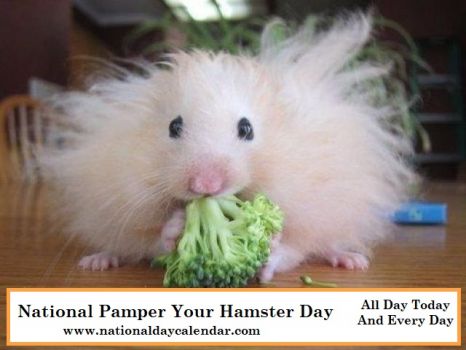 National Pamper Your Hamster Day is observed annually on every day that the sun rises and/or every day your hamster has a hangover.

Modern day hamsters are the descendants of a trio of a small group of three blind mice that were viciously attacked by the farmers wife. The farmers wife, who had a history of DUI-LB (driving under the influence of lima beans) and had recently been released from Serenity Lima Bean Rehab Institute, savagely attacked the three blind mice with a carving knife. First responders were quoted as saying “Have you ever seen such a sight in your life?”

Pamper your hamster by having a “Spa Day”. Give your little rodent 2 pedicures, front and back. Dye his hair in a checkerboard pattern. Watch “Of Mice And Men” on NetFlix. Tie up the farmers wife and let your hamster exact his revenge. Take your hamster out dancing. Take him to a Mickey Mouse movie. Get him drunk on Cat Nip Seeds.

After the horrific encounter with the farmers wife, the three blind mice came to realize that due to their tailless appearance, none of the three mice were used as “lab rats”, hence as they evolved, they kept their abbreviated tails soas not to be confused with ordinary mice.

Image copyright: My adorable Killer (who just got released from prison)

Bother . . . late again to the party but then it was only a national day not international so perhaps we "celebrate" on a different day here. Personally I'm lookinger forward to "Hamper your Pamster Day" . . . ;-)

Do you call him Killer because we have died laughin?

That fits @LinM, but now I can't get that snap, cackle, pop out of my head... hmmm...I think I will have a bowl of rice krispies

That fits, @junglejim , but now I can't get that cackle out of my head...

What is the name of this hamster Phyllis Diller?

Yes, Spam lasts forever in my cupboard -- much like sardines. I buy the little buggers with good intentions of sustaining my bone integrity but, man, -- I just don't like to look at them much! Easy to pass over and "age" on the shelf, @rswestley ...

Thank you for your comment, Lin, but I'm afraid the only thing I can do with your comment is donate it to the local food bank. As I am sure you are fully aware, the United States Department of Agriculture - the Food Safety and Inspection Service - has determined all comments over 6 months of age have "passed the peak of freshness" and thus cannot be broiled, boiled or sautéed. I would suggest that next time you send a can of Spam. Spam lasts forever and makes a dandy pudding... :-)

Cute little devil, rs, but maybe not so much back-combing, looks like he put his paw in an electrical socket. I knew that was the history of 3 blind mice, but kept it to myself - all the best for 2019 :-00

That's horrible news about Skinky. I'm very sorry for your loss. If there is one thing we don't have enough of, it's hamster hotties. If I had known, I would have sent a bowl of trail mix to be enjoyed at her funeral. I do hope that mink was prosecuted to the fullest extent of the law. If there's one thing I hate it's hamster assassins that cough up hairballs. And no, never had a real desire to go to the bayou as I have an aversion to alligators and jambalaya gives me gas. In fact, in 2005 I petitioned my congressman to contact France and find out what their return policy was so we could rescind the Louisiana Purchase and get our $15 million back. But no, my congressman could not find the receipt so we were stuck with 828,000 square miles of alligators in the south and Sasquatches in the north.

Skinky ran a sailboat rental on Woodlandlake for hamsters and dogs. Also occasional waterskiing with a guide. Price was $2 for sailboat. $3 for water skiing. Was goin' pretty well til we found her upside down on kitchen floor. Dead. We think Mink got her. Yeah she was a hamster hottie hanging in the bayou and the bay. Back in the 60's. Maybe you frequented the Gulf Coast. She had a following there. Made us a lot of money. Didn't like the thunderstorms. Was good old days. Skinky Alexander.

Thank you Jim... I'm running a special this week and for one week only... grins are .25 cents, chuckles are .50 cents and tee-hees are one dollar. You can make your check payable to Killer. However, if you actually died laughing you will get a 25% discount. Just have your government issued picture ID card and your Certificate of Death sent to my office inside the bathroom of the downtown McDonalds.

Thank you Elinore for the vote of encouragement. Since I have retired, my two most favorite things to do is drink warm prune juice and to expose the truth about hamsters that the main stream media has hidden for years. Did you know that Alexander Hamster was pictured on the first $10 bill? And Neil Hamster was the first hamster to walk on the surface of the moon? And New Hamster was one of the original 13 states that founded the United States of America? The truth is out there...

Now I can see why you call him Killer, I died laughing. HaHa.

Dianne? Should I know this "Skinky"? Her name sounds familiar, but I can't seem to recall where I heard that name before. Did she win the bronze medal in the 2016 summer Olympics in the cheek stuffing event? Or is she one of the 26 hamsters that named me in a paternity suit? Was she the bomb sniffing hamster in the movie "The Hurt Locker"? I can tell it's going to be another sleepless night wondering who Skinky is :-(

This hamster just realized that her broccoli didn't come with cheese sauce. Adorable and thanks for the "true" history of the 3 blind mice. Elinore

And Bob, as well.

I will put a rose on Skinky's grave. May She RIP.

I was going to post this, but I'm having a bit of a "clean underwear" day!! Thanks for pir picking up the slack John!!