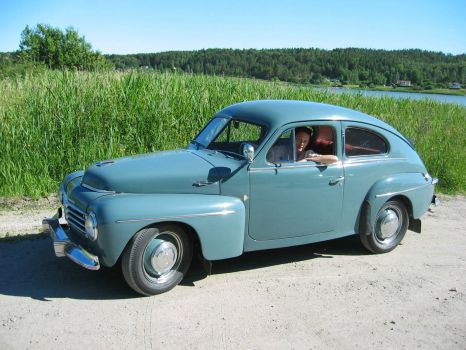 hancheye,
I had my first for a couple years and then I went on a deployment and got a new one that I kept for several years and the only problem I had was my girl friend put a radiator cap on as the gas ca p and it sucked the bottom of the tank in so the gauge only went to half. I ran out of gas on the PA turnpike had a semi-truck push me to get started and pushed in the trunk. It went on my next deployment.

I do not recall the specifics of the problems, but you could pass by a Volvo Dealership in the USA and the place looked like it was deserted, absolutely no one there to buy cars, much less look at them. The word had gotten out that Volvo was a very poor product and to steer clear of them. The opinion of the vehicle has changed a lot since then and its know as a reliable car and very safe car. Maybe there was a different manufacturing plant for exports and that or those particular plants just did not have the quality control in place, I have no idea, but they (Volvo) took a severe beating here in the USA reputation wise and it lasted for years.

Strange @hancheye, that was new for many of us in Sweden. Those cars was the most common in Sweden, known for reliability and so on.

Maybe there were different lines for export. It was with 444 and 544 (but more in features than quality).

@vabutch, I had a friend in Baton Rouge, Louisiana who owned a Volvo dealership back in the 60's,70's and 80's and the volvo's were so poorly put together that he and another group of dealership owners flew to Europe and threaten to cancel their dealership agreements with Volvo if they did not immediately improve their product and make good on all the losses that were experienced by both the customers and the dealerships. Apparently an agreement was reached and product quality was greatly enhanced in a few months. Do you recall all that era with all the issues with Volvo?