Monument To The Eternal Postman....... 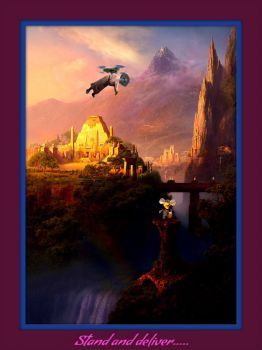 Today we join sweetlittleoldgranny, to visit the beautiful region of Higher-Lower-Bonga, gateway to
Higher-Upper-Bonga, which can be seen in the background......
The almost life-like figure standing on the pinnacle in the foreground may at first glance be mistaken for yours truly, but is in fact a statue - a likeness of myself perfect in the finest detail, and standing as a tribute to the 'eternal postman' who overcomes all obstacles to deliver the people's mail far and wide.......sooner or later......
Designed and made by that illustrious inventor, uncle bluebottle, the monument also serves a practical purpose, as the ears light up at night, to guide travellers who may be lost in the dark.......
Created by lelabugosi Published 23 November 2013
Why this advertisement?

Wish I could send you some, June, I know you don't do but perhaps Karl did..!!

Hi Hanne, I don't cook any more as I worry about the oxygen so they are just a crisp golden memory

You have? Do you make it? We had some this evening again and have for tomorrow too! Squeeze them, why, oh why should I do that?? They are roasted and extremely NOT squeezable...

Hanne, a lot of people in this village are from Viking stock and we have a recipe exactly like that called tetty cheds. or potato toads they are just gorgeous. And please don't squeeze them they don't make wine

Be careful with your stomach, patsquire, we ate far too many last night, they might react a little like cabbage......

Thanks for the recipe Hanne! I love all kinds of potato dishes, and now I have a brand new treat to try. Sounds absolutely wonderful, too!!!

Hanne now you've done it. I'm off to the kitchen!

Raggmunkar are Swedish, and you grate potatoes not too finely, mix them with a little flour, eggs, salt till you have a not too fluid mass. Roast them in a pan in good and rather warm oil, spread the "dough" pancake-like and roast them till they are golden brown on both sides. Not too big pancakes, it will be difficult to turn. I make two at a time in a common size pan. You can use them for whatever and eat them as a snack!!

always willing to learn new nourishing food. Tonight and tomorrow are my chef's days off so i make my own. Oh dear. Tonight I hope to have spready cheese with celery and cucumber chopped up tiny, all on a bed of crisp dark ryvita and then, since I liked it so much, I will have another one. .:))

Pea and ham soup with dark bread..........yummm..........I'll be there for that one too! There are so many wonderful traditional dishes. I told a bunch of my redneck Alabama friends one evening that I'd just had a delicious dinner of fried kielbasa and mashed potatoes, and they all said, "Whut's that?" C'mon boys, open your horizons! But then, I've never heard of Raggmunkar before, Hanne. Live and learn, especially where food's concerned.

I'll go for the raggmunkar please and some dark bread to dip in. Sounds like my pea and ham soup which is just gorgeous

Blue Heidi has it exactly! All we added to her menu were some creamed corn and glazed carrots, a bowl of jello and some buttermilk biscuits, with black olives and applesauce on the side for extra flavor treats.

We just had "raggmunkar", smoked ham and pea/carrot stew!! Very well tasting and much easier..... We were thankful for that.....

Ohh Lela, you just took the words out of my mouth!! I wish everybody a wonderful Thanksgiving spent in their special way... and those who don't celebrate, have a very nice evening wherever you are....

Good question, Oh Surreal One. In the early days of the NFL the Spartans were founded in a small town in southern Ohio, where there were not nearly enough fans to support the team. Five years later, in 1934, a radio station owner in Detroit bought them, moved them and renamed them the Lions. But Detroit was a baseball town, with the Tigers the reigning American League champions.

So to make a big publicity splash, the Lions owner scheduled a Thanksgiving Day game against the powerhouse Chicago Bears, and convinced the National Broadcasting Company, his radio station's parent company, to broadcast it nationwide. It was a smash hit, with the stadium sold out and turning fans away at the gate, and high ratings on almost 100 radio stations across America.

Easy as that, the tradition was born! More than 30 years later the Dallas Cowboys played copycat (on television, of course) and it worked just as well for them. And I'll tell you, except for my high school years, when our team played every Thanksgiving and I was in the band, I've watched and loved the Turkey Day Lions game my whole life! It's half-time now, and I've gotta get back downstairs for the second half kickoff pretty soon.

I'm glad you asked, because I didn't know the answer myself until now!

fill your head with chemicals and sleep soundly, things get worse every day

I may be in a tryptophan induced coma myself, so it's iffy if I'll be able to call. We'll be eating after the Lions/Packers game, ourselves. But that's when our guests arrive.

You know, lela.... you could make a fortune if you developed a sleeping pill made of tryptophan. Or maybe people with insomnia should just eat plenty of hot roast turkey.

You seem fairly knowledgeable on the subject of football,Mr Squire, so maybe you can explain this to me.... How did the Lions get the right to play the early televised game on Thanksgiving EVERY year?

Oh, yes Heidi-floppy-clocks, oh yes! It's always a battle between the tryptophan (a sleep-inducing chemical in turkey meat) and the NFL football. Football usually wins, but not always! Tomorrow the Packers play the Lions in the early game, so we won't eat until after the game. Then the late games will have to take their chances. Forecast : drowsiness with a strong chance of naps!

It's Gobble, Gobble tomorrow! If I go into a deep enough tryptophan coma, I may even call 1-800-555-getlucky, just to see what happens. If I'm any judge of the situation, he'll be in a deep tryptophan coma himself.

Yes, indeed, Juneeee, as Shakespeare would have written it in this situation: gobble, gobble, toil and trouble.....

Well, there were a number of well-lit G.A.S. members at the party the other day...perhaps one of them wouldn't mind stepping in...I can't myself as I'm up to my elbows in stuffing and trying my darndest to corner thousands-of-cakes before she gets wind of what's up!

Dear Lela , under this circumstances , I give you an official ATTEST , with the declarated stamps of 10 high-up graded lawoffices that it is impossibel for you to do a good Job as postman !Nobody can bring post inBongaland : this higher , lower , upper , little , big , unnowd , wellnowd, longer , shorter ,behind , in front , up and down ,.........

What was the answer?

Helloo, Juneee and Patty!
My pleasure dome is full of them!..........Though I do believe sweetlittleoldgranny is the real expert on the subject.......
Catch ya later, Patty!....Poodle-tip!

If you're interested in pleasure domes, Juneee, don't forget to dial 1-800-555-getlucky! I still give discounts for frequent flyers.

You see, dealing with Roger would be more of a pleasure drone, if you know what I mean.

Dear Roger, do you have a phallic symbol in your stately pleasure dome, CL is an avid collector of them

How impressive . . . . . . . I had no idea you counted Albert Bierstadt among your many predecessors, your longish lineage, your ancient ancestry of people to whom you are related who lived and loved and died long before you in, so to speak, earlier lives, earlier times. Y'know what I mean? I mean, y'know what I mean, right? Because if you don't know what I mean, speak up and I'll explain my meaning to you in detail.

Church Lady I didn't see you at Mass last night. No matter you can mail in your tithe and this time be sure to sign your check!

Ah yes...the statue ' Our Leader Of The Free-ish Higher-Lower-Bonga' often compared to the 'Cristo Redentor' in Rio de Janeiro, Brazil. Comparable in size, the main difference being where The Cristo has his arms outstretched, ' Our Leader Of The Free-ish Higher-Lower-Bonga' has his ears outstretched. It is said on particularly windy nights it spins much like a whirligig flashing multicolored light sometimes rivaling that of the aura borealis though I have not seen this in person.

If I stand on that cliff edge, I might be able to toss those rocks at that ugly statchoo. Maybe I can knock off those ugly Topo Gigio/Mickey Mouse ears.

Lemmee at the rocks! I'll toss a few at you, Roger!

Helloo, lovelee ladiees!
I haven't been around lately, due to the unprecedented success of my business venture, but just popped in to see a sensuous, brooding face below me (so to speak).........helloo madame-of-the-churchy!......You should come and see MY rock garden sometime!
Toodle-pip!

I must have a replica for my rock garden!

Uncle Bluebottle did indeed make it - he wanted it to look like the Eiffel Tower, and used to stand here when he was trying to fly......he would jump up in the air, then fall into the water below.............

What kind of thingy is it that you are "standing" on? Looks like something to put a huuuge potted plant on top of in the good old days?? Did uncle bluebottle find that for you??

Higher-Lower-Bonga is indeed the edifice in the foreground of the background, while Higher-Upper-Bonga is the upper, higher edifice right in the background of the foreground......the building in the lower middle-ground, between the foreground and the background is Higher-Lower-Middle-Bonga, which I believe is quite apparent by the name itself.....as all the other Bongas should be.......I hope I have now made myself perfectly clear.........
Blue-lady-posing-for-picture............PFFFFFFT!.......
Tom-minus........That is the point - the statue serves to show how dedicated are our mailmen, in delivering (or attempting to deliver) mail to these far-flung outposts of civilisation..........

It seems a dark and dismal place to put a statue...so out of the way....almost a place where nobody could see it....but I guess the post office had to put it somewhere...

But... but... you never seem to actually deliver any mail to the addressee, just dump it somewhere in the vicinity where it may be found. You've really ripped off the poor taxpayers of Bonga-Bonga this time!

It certainly looks like a fine area, Lela, is it as wild and lonely as the other Bonga, where we have been a couple of times delivering letters or whatever - the ears with light in them is a glorious idea, why don't you put light into yours??

A most magnificent view to behold! SLOG doesn't appear to be completely comfortable.... at least she will have no trouble avoiding the brightly lit statue....