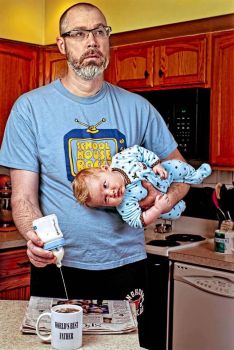 Created by starlord Published 3 November 2012
Why this advertisement?

Texasstar: go stand in the corner for an hour. Calling a man a 'joker'? tisk tisk tisk. That's a major 'no no'. He's not dropping the baby, he's got a firm grip. He's so tired that he doesn't know what he's doing with the milk. A little understanding and compassion would be nice.

Oh, yeah, right! This joker is probably glued to the television or some such nonsense, while he almost drops his baby and makes a nasty mess pouring milk in his coffee. Love that mug! I agree with pkin, we've done it for years, and most of the time while working full time jobs! Okay, done with my diatribe!

Nope, Ank. Actually it is forbidden to agree with me. Who was it that said: It's agin the law ! Some cartoon character :-) Making you happy? Wow, I have to show my bad side then.

Ha ha ha, I don't have to agree with you. Man you make me happy.

Indeed Cactuspatch. He looks so tired, the poor guy. And nobody seems to pity him :-(

Give me a break. Poor thing. We women have done it for years.

He has that 'early Morning after a sleepless night when baby is teething' look!!

I can completely understand this! Poor guy, been up all night and is totally sleep deprived! The poor man. At least he's got the baby in his arms! (well, arm actually......well the baby looks like it's going to drop, really......well, maybe the man isn't so good after all!)
LOL, Starlord, LOL.
Is that you?

AHHHH Poor Man. He looks like he is in a trance. He sure don't know what he is doing.

And how about the poor tall man?