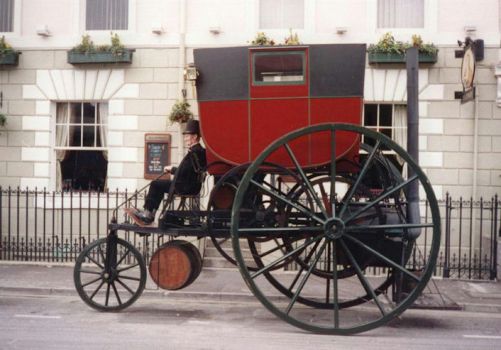 This has been prompted by one of kevinwright200958's super images. It prompted me to delve. This is a replica made from Trevithick's original 1802 design by Tom Brogden in 2003. Having a human in the picture adds to the absurdity of the concept, by our current standards.
Created by ferretneck Published 31 December 2015

I would think the guy steering the tiller would be tired after awhile. There is no rake to forks on the front wheel, so every bump it would be trying to turn this way or that.....

I can't imagine that being perched that high up was very appealing.

I've noticed lately my times are slowing down some..... But there are some neat machines on here from time to time. Happy New Year to you too ferretneck.

Have a good New Year

I remember the name Thevithick name from reading about these sorts of carriages before. Maybe there is another that carried on the idea. I remember see pictures of some of these steam carriages built as 4 wheeled ones also. I think someone even posted a puzzle or two back in the day. I may have to go do some searching also.....

Thank you for your input. I must make it quite clear I am no historian nor expert in steam engines.
I enjoy kevinwright200958's puzzles of steam vehicles and get more fun finding out about them. This one was for me, about his wierdest yet so I had a rummage on Google and found out the information. Trevithick came up with this idea in 1802, he also developed a rail locomotive and he died in the 1830's so I can only assume things had moved on by then. I suggest you have a delve into the Steam Car Club of Great Britain web site. The tale behind this particular vehicle is fascinating and the information on the site may help you.

1802? I was thinking he built these around the 1840's. From what I had read, it was used to transport passengers between a couple of cities in Britain. With some success even. But the horse and carriage owners felt threaten by this and had the government shut him down.