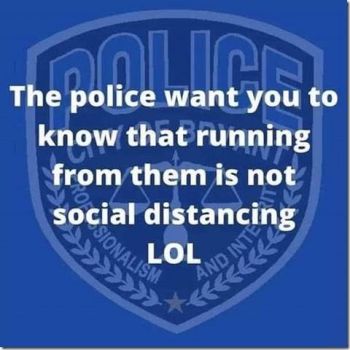 Created by PenSet Published 21 April 2020
Why this advertisement?

Ooh, I want the jokes!

Penny,
I fully agree with you that it's not about health. I don't know what you think about this video:
https://www.youtube.com/watch?v=c4Aps2NPe54
but what I sense is yet another tightening of the end times noose. When compulsory human microchipping starts getting introduced to the public narrative, I can't avoid thinking that the Mark of the Beast isn't far off.

I've also noticed a similar inconsistency outside Australian Government (social security) Centrelink offices. HUNDREDS of people who have been laid off for social distancing purposes stand in close groups, waiting for hours to get their cash handouts or apply for their isolation money.

Please DO put up the rest of the jokes. No doubt we can all do with the laughs. :)


@Mischka
Or else they couldn't keep their eyes away from a well rounded woman's body in a bikini! (The woman later reported to Yahoo that they engaged her in conversation for about twenty minutes.)

The whole thing is not about health, I don't think, beb -- why aren't the federal workers being sent home? Why can crowds wait shoulder to shoulder outside a Costco and then only a few in at a time so their distance can be kept?

Mischka, a friend sent me a ton of jokes and I thought I would put them up one a day for awhile. Some are really, really funny.

MAN those cops must be bored, Blond.

We have the absurd situation down here of beach closures for social distancing.
Swimming or running is allowed on some beaches - as long as the two metre rule is observed and there are no more than two people - but sunbathing, even when you're the only person on the beach, is NOT ALLOWED!

So, Yahoo had a picture on the front page today of FIVE armed, uniformed police confronting a 48 year old woman in a bikini on a beach which was completely deserted except for her one girlfriend and another man who was swimming away off in the distance.

When five armed, uniformed police officers walk half a mile down a deserted beach together to fine the only other person on the beach for breaching the lock-down rules, I think someone has lost the plot.

Thanks for the chuckle!!!