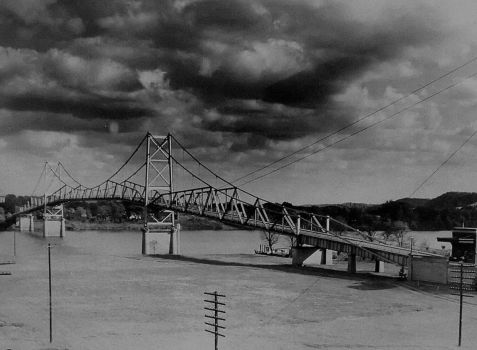 This is a picture of the Silver Bridge over the Ohio river that collapsed on Dec. 15, 1967. 46 people were killed. It remains the worst bridge disaster in U.S. history.
Created by jlex60 Published 3 days ago

You may be thinking of the movie The Mothman Prophecies with Richard Gere. The film WAS loosely based on the Silver Bridge disaster. I say loosely because they didn't depict things how they really happened. Besides they alleged Mothman, the movie did get some facts right. Yes, the bridge failed and yes, 46 people were killed, but in the movie it happened on Christmas eve. In reality, it was Dec. 15. Also, at the end of the film they say it still remains a mystery of why the bridge failed. That's not true. They know exactly what happened. They do this for "dramatic" reasons. In my opinion, if you're going to make a movie about a true event, then depict it how it REALLY happened.

Tacoma Narrows sounds familiar, but I thought the film I remember had cars on it. Well at any rate, a bridge collapse is always tragic!

No. That was the Tacoma Narrows bridge in Washington state. Fortunately, that bridge was closed when in collapsed.

Is that the one we see in films, that bounced up and down so violently?