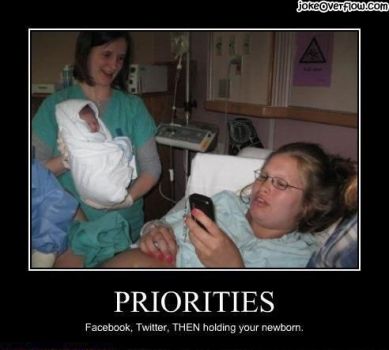 Executives of William Randolph Hearst’s media empire conspired to stop the release of what 1941 film?
Created by Stillmanic Published 14 April 2019

Apologies for not responding sooner, loads to do in the garden, and more over the coming weekend.

LOL Joe, did she have lockjaw!

My daughter would sit on the couch and text her best friend....who was sitting next to her!!!

If this photo is how it looks, I would take the baby away until she puts her cellphone away.

Although I think cp are great for some things, I also think they're very much misused and a waste of time when people can just face one another and talk. (❀ᴗ❀)

Since there already is a person taking pictures, there is NO excuse for this mother to be obsessed with her phone instead of her baby.

ok - now back to reality, this IS just a picture puzzle for a quiz game. moving on...

there are just some things that should be lived in the moment...I would think the birth of a child would at the top...no need to share for an hour or so...maybe even 15 minutes? ... Sherry :)))

I understand that everyone perceives things differently, I just feel sad that I have to tell my daughter that people think she is a bad mom and that her child is doomed because she couldn't wait to send me a photo of my first grandchild.

nanab...I tried for several minutes to agree with you...but, no...look, her tummy is still uncovered...no time has passed at all..., my original opinion still there...the child will not be cared for (or treasured) properly...

Didn't get this one - I'm still sticking up for that new mom, she took a photo AFTER she held her baby- she's just checking the shot and sending it to family and friends - look at the smile on the nurse's face! That baby is being loved and well cared for by all - If you block out the words on the pic you might see it differently.

William Randolph Hearst Sr. (April 29, 1863 – August 14, 1951) was an American businessman, newspaper publisher, and politician known for developing the nation's largest newspaper chain and media company, Hearst Communications. His flamboyant methods of yellow journalism influenced the nation's popular media by emphasizing sensationalism and human interest stories. Hearst entered the publishing business in 1887 with Mitchell Trubitt after being given control of The San Francisco Examiner by his wealthy father.
Moving to New York City, Hearst acquired the New York Journal and fought a bitter circulation war with Joseph Pulitzer's New York World. Hearst sold papers by printing giant headlines over lurid stories featuring crime, corruption, sex, and innuendo. Acquiring more newspapers, Hearst created a chain that numbered nearly 30 papers in major American cities at its peak. He later expanded to magazines, creating the largest newspaper and magazine business in the world. Hearst controlled the editorial positions and coverage of political news in all his papers and magazines, and thereby often published his personal views. He sensationalized Spanish atrocities in Cuba while calling for war in 1898 against Spain.
He was twice elected as a Democrat to the U.S. House of Representatives. He ran unsuccessfully for President of the United States in 1904, Mayor of New York City in 1905 and 1909, and for Governor of New York in 1906. During his political career, he espoused views generally associated with the left wing of the Progressive Movement, claiming to speak on behalf of the working class.
After 1918 and the end of the Great War, Hearst gradually began adopting more conservative views, and started promoting an isolationist foreign policy to avoid any more entanglement in what he regarded as corrupt European affairs. He was at once a militant nationalist, a fierce anti-communist after the Russian Revolution, and deeply suspicious of the League of Nations and of the British, French, Japanese, and Russians. He was a leading supporter of Franklin D. Roosevelt in 1932–34, but then broke with FDR and became his most prominent enemy on the right. Hearst's empire reached a peak circulation of 20 million readers a day in the mid-1930s. He was a bad manager of finances and so deeply in debt during the Great Depression that most of his assets had to be liquidated in the late 1930s. Hearst managed to keep his newspapers and magazines.
His life story was the main inspiration for Charles Foster Kane, the lead character in Orson Welles's film Citizen Kane (1941). His Hearst Castle, constructed on a hill overlooking the Pacific Ocean near San Simeon, has been preserved as a State Historical Monument and is designated as a National Historic Landmark.

Got it. One of the best films ever made.

I agree Robin and Heidi, I see guns, prison and drugs in the child's future :((

Will someone either take away that phone or report her to Child Protective Services? That baby deserves better!!!

Nanab: I totally agree about the first photos /videos to keep forever - but there must be at least 2 persons other than the mother beside the bed - one to take the puzzle-picture - one, whose shirtsleeve is seen in the bottom of the picture to the right I'm smiling When I had my sons in 1975 and 1978 photo-taking in the delivery room was not common - if allowed, but in my cases it did'nt matter anyway, cause I had both my sons by caesarian, where the father was absolutely not allowed in theatre. We have hundreds of babyphotos afterwards.

If I see my daughter do this after Madeline is born in June, I'm taking away her phone and grounding her!!! Can I still ground her at 29?? LOL :))

You know me Bonnie, I always try to put a happy spin on things in "my world" lol

I think she has literally just had this baby BB, you can see someone still in 'blue scrubs' still sorting things out.

First, third or fifth...this is SAD.

I see this photo in a different way. Most babies are given to mom directly after birth, not after being cleaned and swathed. I think mom is now getting her phone ready so the nurse can take a pic of her holding her new baby, then she'll have the moment captured forever.

Manicpuzzler: Really good 'joke' (or reality !!)
sbwilner: I'm worried too - have seen similar situations - and even worse - in various live TV-documentaries etc. I think it is alarming, where youngsters, teenagers and their parents are heading for. They claim to be s o stressed up …. no wonder, as long as they think it is of utmost importance to tell the hole world, what they had for dinner, what they are wearing, whom they are hanging out with etc. 24 hours a day. It does not matter, how many likes you have from - in the end - totally unimportant persons. The only thing that matters is what your family, close friends and colleagues 'like' about you in real life.
Some time ago there was a puzzle saying: "I wish the brain was an APP, so people could start using it."

I agree, maybe this is her third and the thrill may be over...it really is astounding...wonder how long the nurse stood there until the "mother" looked over...or maybe she's autistic...then I could almost, and I say almost, forgive...is this picture going to be framed and put on the wall?...so truly sad...

Frightening isn't it. It makes me mad, I wasn't lucky enough to be able to have children :(

And I do worry about the welfare of this baby...if one cannot take a few minutes to meet her truly just newborn, the child's future is in grave danger...Sherry :(((

Funny joke, no idea what the quiz answer is.

A little boy goes to his dad and asks, "What is politics?" Dad says, "Well son, let me try to explain it this way: I'm the head of the family, so call me the Prime Minister. Your mother is the administrator of the money, so call her the Government. We're here to take care of your needs, so we'll call you the people. The maid, we'll consider the working class, and your baby brother, we'll call him the future. Now think about that and see if it makes any sense." So the little boy goes off to bed thinking about what dad has said. Later that night, he hears his baby brother crying, so he gets up to check on him. He finds that the baby has severely soiled his diaper. So the little boy goes to his parent's room and finds his mother sound asleep. Not wanting to wake her, he goes to the maid's room. Finding the door locked, he peeks in the keyhole and sees his father in bed with the maid. He gives up and goes back to bed. The next morning the little boy says to his father, "Dad, I think I understand the concept of politics now." The father says, "Good, son, tell me in your own words what you think politics is all about." The little boy replies, "The Prime Minister is screwing the working class while the government is sound asleep. The people are being ignored and the future is in deep $#&@!”