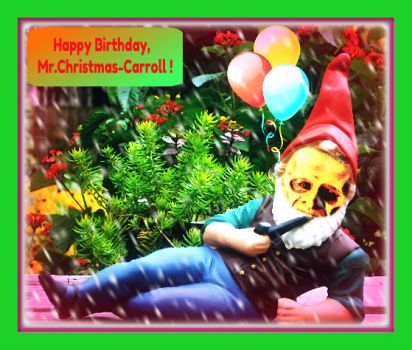 Just thought I'd send you this beautiful, life-like, garden gnome - to spread endless joy and happiness
in your home...........Hope you're having a great day, and may your snowpeople continue to multiply!!.......
Created by lelabugosi Published 5 May 2013

It's GREAT June, you know what you are talking about indeed!! Respect!!

Hanne will tell you I did write a book about it all, not published and never will be but I got it out of my system

Who needs a history book when we have our very own Junee?

He is SO romantic, Juneee, that's why!!

yes I remember that. She must have understood that people in the northwest of England were called the Northern Welsh in the old days. Plus there was a real life Merlin who lived near where I do, he was a Druid and Taliesin wrote about him as having met him in the wild Caledonian forest of what is now Scotland. He is called Merlin Wylt, but unless he was a couple of hundred years old in Taliesin's time it was a different one. So many places to claim Arthur but none are properly attested as they are in the case of Urien. Maybe the enduring popularity of Arthur is the total mystery of the figure.

juneeeee...When Mary Stewart wrote her Crystal Cave, etc., she had Arthur being raised in your area with a kindly king and his son, Sir Cai...from when the two boys were babes until the sword-in-the-stone incident...must have been some hint of that in her research.

Thanks ggl, now it worked for me too!! Beautiful egg really!!

Same here for me, also...I think something got dropped in the copying/pasting.....Hanne try this one....it works

Thanks Junee, I remember it now!! It's fabulous history!!

There's something wrong with you link jignut, I get my own profile when I use it!!

I would still like to congratulate Wicca on her exertions, well done girl!

Urien and Arthur were about 150 years adrift to betray each other, but in the Morte D'Arthur of Thomas Malory I think it was Owain Urien's son who did something a bit naughty. But then in his version they all had castles and armour etc, in the 5th-6th century! Urien was a real person and ruled the lands all around Cumbria. Here at Penrith we have the Rheged centre which is what his kingdom was called. They can keep their Arthur just give me the real heroes Urien and Owain, and Taliesin their bard who kept the tales alive.

Didn't King Urien betray Arthur...and didn't Taliesin "downplay" (to choose a kinder word than "hate") Arthur?...just wondering if memory is correct or has wandered off...

News Flash! Wicca laid an egg! No congratulations are in order though. It wasn't fertile(unless Wicca isn't telling me something)

many people have thought about Cumbria and Somerset and France. My money, if ever there was such a guy, is that he would have been some 6th century war leader living near Stirling in what is Scotland now. all of the people of the West coast of Britain were called Welsh, where Cumbria is now was the land of the Northern Welsh.

Ohhhh, I see it now - that's where my pipe is!!! - just keep it, I have some more!! Do you mean the one with the round table, Junee? - well, why shouldn't he be Welsh?? - or Cumbrian? Has anybody ever thought of that?

Hamlet IS a Danish prince way back in the grey history, Pat, so actually that's the reason. But from the Viking Age, where big parts of England were occupied by Danes, English has got many Danish words which have of course been changed into "English" as times have gone by!!

Now I know why Shakespeare set Hamlet in Denmark--Danish was actually his native tongue........

This is not a genome, Davyzip. A genome is your father. Maybe he looks like this, but please don't be confused by the resemblance. You seem tall, by the way, but then I eventually became much taller than my father, too. It's a pity lelabug can't say the same thing!

Jc, keep one thing in mind about birthdays, the older you get, er, uh......I forget the rest.

Oh give me a home,
where the gnomeos roam,
and the modest-size people can play.

He is "...a modest little person with much to be modest about." - Winston Churchill

I think this Genome stole the pipe that used to be in Elfie's pixture. Just my opinion.
Hippo Birdie, Two Ewes, JC.

I can only say, that if the gnome is treated kindly he will help you with a lot of things that will make your life much easier!!......(won't you Lela?)

No plastic pink flamingo? Tsk.
Happy birthday, Jim. I'd say many more, but I don't know how many of these you could stand.....

Anyone who broadcasts their birthdate to the world at large deserves a gift such as this....a beautiful monstrosity indeed....however JC's 8 neighbours are not amused....the baying of the various and sundry dogs is driving them mad....the neighbourhood beautification committee will be arriving shortly.

Gee..JC.......I don't quite know what to say.......except, I think I would have kept my birthday a secret.....I mean, receiving a present such as this can only make you the envy of the neighborhood (she said with tongue in cheek).......BUT!!! since you spilled the beans and received the white elephant.....just let me wish you a very Happy Birthday....

Happy Birthday JCarroll !!
I think this gnome is exquisite.
It could be a bubble pipe ;^)

And so - what's wrong with the gnome?? To all of us who know gnomes he is marvellous and a very nice fellow well liked by all other gnomes, and of course he will be able to go home if he doesn't feel well treated!! So are gnomes, and they DO smoke tobacco!! Do hope you still have a happy birthday Jcarroll!!

It looks like it's still snowing on your side of Bonga Bonga Mr. Xmas...hope it doesn't interfere with all the partying...perhaps your garden gnome will disappear under a blanket of white...one can only hope! Happy Birthday!

would we want to be advertising the joy of tobacco to young passers by, or even old passers by

sadly I believe you are right. I hear Lela has been sending that to people for years and it always finds its own way home, you can but live in hope that it has a gnome to go to!

Now this sort of thing deserves, no--requires-- a place of high honor in your front lawn! What a prize, and you'll certainly want to secure it so it doesn't disappear in the middle of the night! Have a happy birthday, and know that there will be no further presents that can come close to this one. It should have been saved 'til last!

Oh how generous you are Lela, I feel sure it will have pride of place on his front lawn making his neighbours so envious that there will be a rash of gnomes. there's a niche market there for some entrepreneurial spirit.

Hope you have a great day Jim, despite the horrendous gnome but don't tell Lela I said that