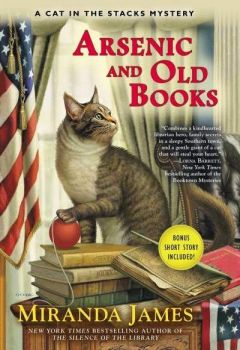 ABOUT ARSENIC AND OLD BOOKS
In this mystery in the New York Times bestselling series, librarian Charlie Harris and his cat Diesel have to battle a killer when a set of Civil War diaries inspires murder…

Lucinda Beckwith Long, the mayor of Athena, Mississippi, has donated a set of Civil War-era diaries to the archives of Athena College. She would like librarian Charlie Harris to preserve and substantiate them as a part of the Long family legacy—something that could benefit her son, Beck, as he prepares to campaign for the state senate.

Beck’s biggest rival would like to get a look at the diaries in an attempt to expose the Long family’s past sins. Meanwhile, a history professor is also determined to get her hands on the books in a last-ditch bid for tenure. But their interest suddenly turns deadly, leaving Charlie with a catalog of questions to answer. Together with his Maine Coon cat Diesel, Charlie must discover why the diaries were worth killing for before he too reaches his final chapter.
Created by Bibliophile Published 31 January 2021

Just getting ready to start this book. Really enjoying the series. Thanks for the cute puzzle and the recommendation! Dotty

Interesting, Bibfriend, may get this one too ;-))))

Thanks for the reminder, PWH, I have read her books, but it has
been years ago, and now that I have her name, again, I will look
her up on my e-reader, hopefully I will find lots of books I haven't
read or at my age, I can re-read the books, that I have read and
they will be 'new' to me. ha! Bib