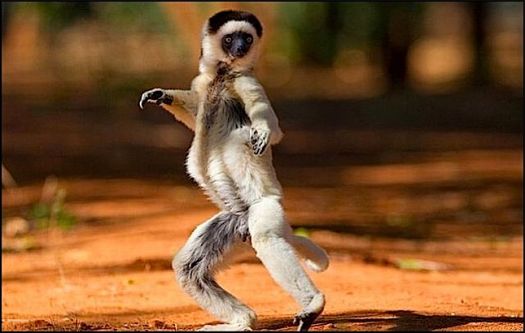 Created by JiggyBelleS Published 27 October 2012
Why this advertisement?

Lemurs are one of the funniest animals around and this one was no exception. You gleefully came up with some real winners! Loved the captions!!

Lee Mur, is tap dancing his way across the Continent, raising money for rare and endangered species. Here we see Lee, bustin' a move, for the local TV station. Catch the exclusive at 6:00, channel 12.

"East side, west side, all around the town", my first Lemur dance recital when we were in grade school . . . now my hip hurts, not fair!!

Eat your heart out, Bruce Lee.

Step back, as I get ready to do my Chuck Norris round-house kick.

Louie the Lemur had a firm grip on first place in the dance competition until he twirled his partner right off the stage.

Is this my best side?

If this has been a few years ago ~ Michael Jackson, eat your heart out. This is how you do it.
or that could perhaps apply to Fred Astaire.

Lester's chances of survival in the wild greatly improved with his newfound interest in Karate.

Larry lived in a world of his own. Today he is driving his invisible moped when he spots a tasty young lemurette...Heeey, good lookin!

Have at ye, ye scurvy knave! Whoops, someone stole my cutlass...

Louis Lemur, as he prepares to step into a triple-toe loop, triple solkow combination jump...

The streaker's attempt to run across the baseball field was another success.

Lenny was small, but he was really getting into Lemo wrestling

I learned this move from Fred Astaire. Ginger where are you?