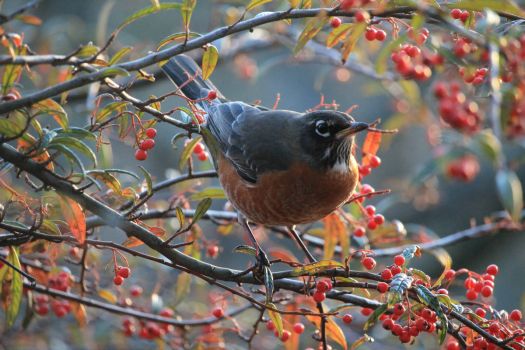 Created by GrandmaJoJo Published 7 January 2016
Why this advertisement?

You are very welcome, niccolino.

Oh he's so gorgeous. What a fabulously clear close up shot, Gradmajojo. Thanks very much for posting.

Thanks, jyl. The lighting at the end of the afternoon is so beautiful.
Sorry to inform you, Chocochipper, but there is no "Canadian" Robin. According to what I have read "The American robin is the largest and best known member of the thrush family in Canada". Maybe he should be called North American robin....cause I sure thought he was Canadian!!
He was just having a late afternoon snack of the Mountain Ash berries, Swiftie. Probably had been eating them all day!
Yes, Jacki, there were lots of berries and lots of robins.

Looks like our Canadian Robin. He's just BEAUTIFUL and doesn't mind his picture being taken! Thanks for a gorgeous shot.

He must have a bellyful, or he'd be gorging himself on those beautiful berries instead of posing for us! Great shot!

Oh lovely. Robin in the garden of plenty!