Do You Know What These Are? An 80-Piece Puzzle 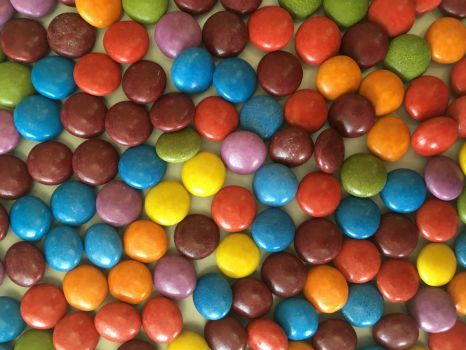 They're not m&m's, and they're not Skittles. Neither of those candies come in these colors. There's also no "m" or "s" on any one of the pieces (no, I didn't take the time to flip them all over to hide the letter). Solve this puzzle to find out what they are.

By the way, if you want to avoid "spoilers" that give you clues to the answer, don't read the comments until after you're done.
Created by ElvisBanana Published 31 July 2018
Why this advertisement?

Thanks for dropping by, and for leaving a comment. I should also congratulate you for making the leaderboard! Huzzah!

I've had other people guess they were smarties, but they're really not. They're called "Trader Joe's Candy Coated Chocolate Drops". Obviously, from the name you can tell that these things are sold at Trader Joe's. They are the same type of candy as the English/Canadian Smarties, and also m&m's. I haven't had Smarties myself, but I can say that these have better chocolate than m&m's.

If you're suspicious of my answer, I can assure you that I took this photo myself, and had to open a new bag of Trader Joe's Candy Coated Chocolate Drops to do it. But you can also look at the colors. They're not quite right for Smarties...

it is actually smarties not m and m ,s because they dont have a m on them.

Hi, NinjaNope! It's nice to have you solve this puzzle!

I just went to the store and bought some more of these. My cousin came for a visit and ate nearly all of my stash of this type of candy!

I do find it interesting that of all the puzzles I've published (of which there really aren't very many) this one has the most solves. That's true by a huge, Large, GINORMOUS margin! I don't really expect large numbers of people to solve my puzzles, but I would have thought that landscapes, sunrises/sunsets, foods that I think are more appealing than these candies (one with a recipe!), or some other puzzle would have gotten the most attention. I guess I wouldn't make a good marketing executive or politician - I have no sense of what the public wants!

Still, I appreciate your words of encouragement. Every once in a blue moon, I'll put up a new puzzle...

Nonsense, Elvis. All puzzles have a purpose (well, almost all). It's best to have some variety.

Thanks for dropping by and leaving a comment, Bill!

Sometimes I think that I should create more puzzles, but I have such a good time solving the puzzles other people publish. That's especially true when I find interesting puzzles that teach me something new. That actually describes most of your puzzles, and for that I'm very appreciative. My silly little puzzles are just snapshots from my life, and don't really teach anybody a darn thing. It's probably best that I leave the puzzle creation to people who do it so much better than I do, people such as yourself.

I enjoyed this so much I was satisfied to go away without knowing what they are. But you told me anyway. Thanks for the fun puzzle, Elvis!

@spaklies those sound good! These are a little different, they don't have the biscuit bites in the middle. They're basically m&m's made with better chocolate...

I love having you drop by! I'll "see" you later!

We have something called astros made by cadbury - looks kind of like these : candy coated chocolate with biscuit bites - - google if you do not have them by you ☺☺

@treker, I'm glad you enjoyed it. Maybe someday we can hang out and eat a few together!

@cleanth, you're quite correct that some cameras will alter colors. I can attest to the fact that these are what I said they are in the statement that pops up upon finishing the puzzle. I know it because I purchased these myself and took the photo.

The thought about the colors being "off" is not at all wrong, as it is actually happening to a degree in this photo. I spread the candies out on a white countertop and took the picture with my iPhone. I suppose it's a combination of the lighting in the room, the shadows, the angle I was at, and the quality of the camera, but that background looks more like a pale, yellowish-green color than it does white. Despite the not-quite-true-to-life color, I can promise you these aren't Canadian Smarties. They sure do look similar, and probably taste similar, too!

Yes you're right on the colours, they were "off" from our Smarties, but I figured the photo had a funny filter. Now we know.... Thanks ;-)

If you're interested in seeing that article (actually, it's more like a blog), which includes a very good photo of Canadian Smarties, here's the URL:
http://www.torontomike.com/2011/03/american_smarties_vs_canadian.html

Thanks for coming by, RaynaGrace!

I've become a fan of Trader Joe's. I'd heard about them for years, but I live too far out in the boondocks for a large company to pay any attention to me or my neighbors. Now, there are several of them within driving distance, but they're all far enough away that I don't get there very often. Because of that, I stock up on some of my favorite items. Hopefully, you'll get one nearby before too long.

In Canada, those are Smarties. Maybe the UK too, I'm not sure.

If we ever get a Trader Joe's here, these will be on my list to try. Thanks, Elvis. Now I want some chocolate...Rayna