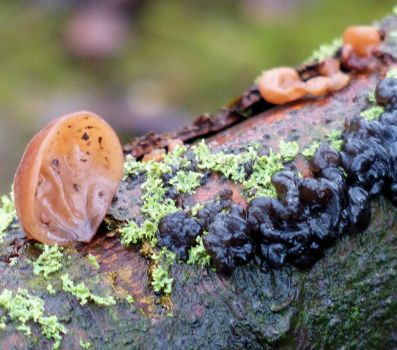 Thank you schutkleur for your kind response improving the title and the link !!

I'm very sorry miztarefet. I did not mean to offend you, or Jews in general.
It's just the name of the fungus. We call it Judasoor, meaning Judas's Ear.
This is what I found on internet :

Auricularia auricula-judae, known as the Jew's ear, wood ear, jelly ear or by a number of other common names, is a species of edible Auriculariales fungus found worldwide. The fruiting body is distinguished by its noticeably ear-like shape and brown colouration; it grows upon wood, especially elder. Its specific epithet is derived from the belief that Judas Iscariot hanged himself from an elder tree; the common name "Judas's ear" eventually became "Jew's ear", while today "jelly ear" and other names are sometimes used. The fungus can be found throughout the year in temperate regions worldwide, where it grows upon both dead and living wood.

So, I could have used an other name. I will change my title right away miztarefet.

I don't have big ear nor long nose , this are anti-Semitic expressions and I expect
from an educated person to try change it and act against it !!!