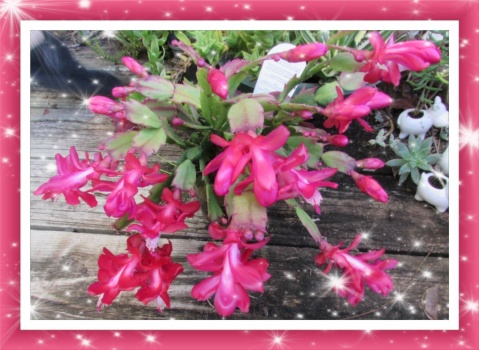 I haven't been outside much lately as we've had very cold winds, so I was thrilled to see this Zygocactus (Christmas cactus) flowering, on the deck. They flower in winter here.
It was so pretty I gave it some sparkles.
Created by jan42ful Published 13 June 2022
Why this advertisement?

Sorry Janet, me again! But I wondered if Gin Gin is closer than Gympie.🇦🇺

Thanks Maree, yes it's a very old small town. Gympie is about 2 hours drive away too. There's a lot of Australia that we haven't seen either.
I enjoy "chatting" with you. Hugs ♥♥

I think the closest we have been to Gayndah is Gympie Janet. Google is so great!!!Thank you so much for telling me. Australia is such a huge country and I am sorry to say that there is so much of it that I have never seen. Hope you don’t get too many fogs! Love and hugs, Maree.💕

We are west of both Bundaberg and Maryborough and north of Brisbane.
Gladstone is further north of us. Love, Janet. ♥♥

Golly Janet, you couldn’t be further from the Blue Mountains! I will have to look it up, as I have never heard of it. The furthest north I have been is Gladstone, when we went to Heron Island many years ago. Love, Maree💕

Thanks so much Rettch, hugs. ♥

It sure does add sparkle to ones day.

Thanks Kinkid, hugs to you. ♥

No Maree, we live in a tiny town in Queensland called Gayndah. It's about 5 hours drive north of Brisbane and inland. We do get a lot of fog in winter.
Hugs to you. ♥

Hi Janet! Do you live somewhere near the Blue Mountains? I know what sort of fogs they have there, as when my husband was alive, we spent quite a lot of time there, because of his profession.Nice warm hugs to you too.💕

Thanks Maree, we have a pea souper fog today, can't see a thing.
Hugs, Janet. ♥

Such a pretty Zygocactus 🌸 We should be celebrating Christmas in July (or June as the case may be).Today in our area it has felt almost as cold as the Christmases we spent in Yorkshire, many years ago (without the snow, although there is snow on the Brindabellas).❄️☃️❄️But a heatwave tomorrow. Supposed to be a max. of 12 degrees! Thank you Jan.💕

Thanks Robin, it just needed some sparkles on a cold winter day! Hugs to you. ♥

Pretty and the sparkles make it ever better. Thanks. :)