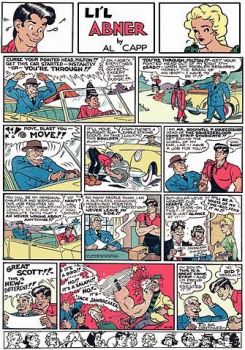 Li'l Abner is a satirical American comic strip that appeared in many newspapers in the United States, Canada and Europe, featuring a fictional clan of hillbillies in the impoverished mountain village of Dogpatch, USA. Written and drawn by Al Capp (1909–1979), the strip ran for 43 years, from August 13, 1934 through November 13, 1977.

The Sunday page debuted six months after the daily, on February 24, 1935. It was originally distributed by United Feature Syndicate, and later by the Chicago Tribune New York News Syndicate.

Comic strips typically dealt with northern urban experiences before Capp introduced Li'l Abner, the first strip based in the South. The comic strip had 60 million readers in over 900 American newspapers and 100 foreign papers in 28 countries. Author M. Thomas Inge says Capp "had a profound influence on the way the world viewed the American South.
Wikipedia

I am disclaiming the contents of the cartoon, as it is too small for me to read. :-)

If you were fond of Lil Abner, or would like to know more about the characters, it would be worth your time to skim thru and reminiscence.

Link to the characters in this cartoon,
https://en.wikipedia.org › wiki › Li'l_Abner
Created by Dollcollector Published 23. Aug 2019

in the moment I love "zits", a comic strip (american) about a teenage son.....i have 2 of these, to funny sometimes

peanuts are read here a lot, also. mor in the later 70ties and 80ties, but still

Thanks Dollfriend, this was fun, I tried to read it but it got harder and harder to see. Cute! @puitepe Angie! Did you ever read the Peanuts comics by Charles Schulz? Very famous here in the US. He was always funny and still politically correct. I am Barb, nice to meet you!

hi. my name is angie, i live in a small town very close to munich, bavaria. sit right now with a big grin and try to imagine your dad trying to get his newspaper ^^. i'm a comic-fan, but more the older things, they were more political incorrect and some of them crazier than the new stuff - but there are also some incredible interesting mangas or grafic novels. most people wouldn't talk about such a hobby, but i think it is real artwork amon the comics, you only have to look for it. have a good time, and i hope you find the tracks of your ancestors....

Great to meet you puitepe, thank you so much for sending a comment.
I hope the translation was readable to you. Did you read of my childhood
memories? I included it in one of the jigsaws, one about my dad driving
up the side of the barn and the one about the airplane delivering our
Sunday paper and he accidentally dropped it on the roof, where my dad
had to climb up on to the second story to get it? I still chuckle at the
thought. Over the years, I would tell people of that story, and they had
never heard of such a thing.

Where about in Germany are you from? I have been researching my
family history for many years now, and some of my ancestors are
from Germany.

Hope to hear from you again.

li'l abner is a comic creation nearly nobody knows here in germany. i only found long time ago something about these (like that grandmum with the pipe in her mouth ^^)

Over the years, Li'l Abner has been adapted to radio, animated cartoons, stage production, motion pictures and television. Capp has been compared, at various times, to Mark Twain, Dostoevski, Jonathan Swift, Lawrence Sterne and Rabelais.

Fans of the strip ranged from novelist John Steinbeck, who called Capp "possibly the best writer in the world today" in 1953, and even earnestly recommended him for the Nobel Prize in literature.