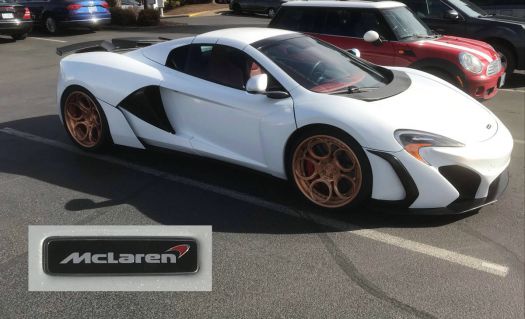 I'm not a car guy, but this one caught my eye (especially those wheels!). Because of my automotive ignorance, I'd never heard of the McLaren before. It turns out they're fairly rare, and rather expensive!

From Jalopnik.com, here's a great excerpt. It's not about this specific model, but it still gives you some idea about the brand:

"Here's a hint as to the base price of the new McLaren 650S: if you sell your house and your children, and you start up an ingenious hedge fund now, you might be able to afford it in a few years. Maybe.

Later on, I happened to see the owner getting into this car. He told me they're pretty rare, and to his knowledge there are only two McLarens in the entire state - his and one owned by a professional athlete. He can't find anyone local mechanics qualified to work on it, so he has to take it several hundreds of miles away to get it serviced!

When he drove away, the car rumbled like a drag racer combined with a jet engine!

Not being a car guy, that all seems like too much hassle for me, but the owner sure seemed to love this car!
Created by ElvisBanana Published 18 March 2019
Why this advertisement?

Actually, I was just kidding. April Fool! I know it was a day late, but I didn't see the comment by @brightspark until yesterday.

Interesting that it only lasts until noon in the UK (or were you pulling my leg?). Here in the USA, it goes from midnight to midnight. At least that's how everyone I know treated it. I would guess that most people are tired of the jokes by noon, anyway...

EB it is day to make a fool of someone and lasts till 12 noon in the UK.

and a happy april fools day to each of you ☺☺☺☺

Thanks, Michelle. I don't understand what happened but I'll take it!! Hugs to you. XX

Sorry to hear about your cataracts PM33 my sister had her's done a few months ago and now does not need glasses any more and she is over 80 years old, so look forward to your op.

Thanks for the note. I'm so glad to hear your eyesight has improved!!! Whatever you're putting in your breakfast cereal these days, Keep It Up!!

Hi, Elvis. Just a short note to say that my eyesight is almost back to normal today. I think it must have been an anomaly with my cataracts. I will get an op soon. Thanks for your concern and suggestions. :-))

Wait a minute! CCR is the issue?!!

Don't you think the 8-track tape deck is a better way to give our ol' buddy sparky a little jab? Those things were awful! They were especially bad when the track changed in the middle of a song. I can hear it now...

"I see the bad moon rising
I see trouble on the way
I see earth(ca-click) and lightnin'..."

I dread to tell you my motor cars !!!

Ha,Ha, Sparky you are now showing your age "Creedence Clear Water" sorry who were they. Just being naughty. Thee Hee.

I enjoyed all your comments. Thank you all.

Thanks, Elvis. Cars are horses for courses! Don't know if you use that expression. The Cooper S WAS a great car but I got rid of it last October cos I don't go out enough to warrant it!!

If you read the story I just told John (parrotman33) about my Honda Civic TallBoy, you'll understand why your love of the Kia makes so much sense to me, even after having driven a Mercedes.

It's great that you and your husband have been able to take so many trips together. Keep doing that as long as you can! I'm sure it helps keep you young.

Here's how far I've been from having a sports car: the car of mine that I loved most was a 1986 Honda Civic TallBoy 4-Wheel Drive Station Wagon! It was pretty much a "mom car" as it would have been perfect for carting kids around town. However, with the 4-wheel drive, I could take that car off the road, and did on numerous occasions. Not to go "4-wheeling" in the mud, but to go off the beaten path. The seats folded down and I could pack a whole bunch of gear in there and still make room to sleep (lying flat in the back, not just in the reclined car seat). That car was completely nerdy, but so versatile! If Tesla would make one like that, that would drive itself so I don't have to, and that's actually affordable, I'd be the first in line!

I'm sure glad you beat the odds with the cancer! Having those sports cars MIGHT have been part of your success. Living life for the moment, doing what you love, that all seems to me a pretty good way to live (disease or no disease). Certainly, the price tag can ultimately catch up with you, but doing positive things for yourself, whatever form that takes, is a good way to fight against a chronic disease. I think being in a positive frame of mind can work wonders, and if zipping around in a Porche can do that, more power to you! And if you can make the Cooper S. do the same thing for you, all the better!!!

Most of those cars have no proper back seat. Just someplace to toss your jacket. And you wouldn't dare park it someplace like Walmart!

I hear you about sports cars! My uncle has a Lexus sports car, and it's nearly impossible to get into or out of that thing! One day, he, my cousin and I all went to a movie. My cousin couldn't drive, as she had just broken her arm. For some reason, the state doesn't want a visually impaired guy driving around, so I couldn't do the driving. So it fell to my uncle and his sports car. I tried to get in the back so my cousin could sit up front, but I couldn't even fit back there! My cousin, who is probably about 5 foot 3, was practically squished up like an accordion trying to fit back there. It was a real comedy of errors to see us trying to get out of that car!

You're right about the drawback of electric cars. I do think it's been partially addressed by Tesla, as those cars can go 250-325 miles on a single charge (depending upon which model you buy). They're also putting in charging stations around the country. I've seen some stores that have charging stations in their parking lots. You park there to go shopping, and charge up while you're inside!

Enjoy life while you can. There is still so much to do.

Thanks, Elvis. I love sports cars and have had a few. When I found out I had cancer I bought a new Porche within a week and loved it. Bought another after 3 years but got a bit expensive! Didn't expect to live long but I'm still here after 11 yrs!! My last car was a more sensible Cooper S. LOL

Like I said EB not my type of car as you have to lay down in them to drive them, silly me I sat up in the one I tried to everyone's amusement, but there you go. LOL!!!
The Tesla if you cannot charge it at the end of your journey then you will have to get a bus back. Thee Hee.

Thanks for the information/link. As I said in my write-up, I'm not a car guy. Cars like this are fascinating to me, but not for the usual reasons. I always wonder why they are so highly priced, why anyone would want one, how much profit does the manufacturer make, etc. I suppose it might be nice to ride in one ~ once.

I'm actually so ignorant about cars that the one that has captured my interest is the Tesla. I couldn't tell about the different models, but I think it's pretty cool that they can go about 300 miles on a single charge. And if you go to the Tesla website, ( https://www.tesla.com/ ) you'll see that they're also making solar panels and storage batteries. Back in the day, it was said that any electricity generated by solar panels had to be used or sold back to the power company through the grid. I guess Elon Musk had some different ideas about that...

I guess I wasn't paying attention when the new rule came out, but I have noticed people talking about it. I only use ElvisBanana, so I might have just ignored it when the information was released...

You're so right about what a waste of money this car is. 3.77 million Rand would buy a LOT of food for the hungry...

Ha,Ha, a McLaren not my Scene but a Bentley is (if I had the money) LOL!!!
I did years ago drive an F1 Mclaren in a simulator as I was in the factory of Ilmore Engineering in Brixworth Northampton who years ago who built the Mercedes engines for McLaren F1.