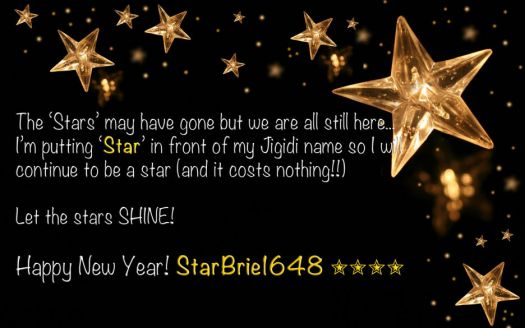 Once a star, always a star!
Created by StarBrie1648 Published 1 January 2016
Why this advertisement?

Indeed, we tried but it pleases me to see your logic is the same as mine - and I'm afraid I did what they considered anti-social and put Adblocker on! Shame on me.
It's still fun to do and people (apart from the trolls who are still out there) are still the same, star or no star :o)
Have fun!

You are so right. Their argument was full of technobabble and illogical but who are we to argue when the mighty $ or £ rears its ugly head.
Did you do this puzzle - there were comments from Magnus and then a few people started getting personal and quite nasty. It wasn't meant to be this way. Why it couldn't have been left beats me.

Hi StarBrie1648
I'm sure many others tried - just as I did.
I messaged them on Facebook, and on direct email.
Ending up conversing with all three, all to no avail.

Their arguments made no sense, but it's their way or the highway.

Thank you Windyhills. It was a sad day and now, most certainly, a lost cause.

Well, I certainly arrived at this party to late, however - ME TOO - SHINE ON ALL STARS!!

And when the lights go out . . the stars shall shine

Actually, I didn't have a star before so I don't think I qualify....

Looks fine to me JM :o)
StarMegabelle2000 - that looks great too :o) Let's start the revolution!

Humm .... StarJM_Cookie it's just not the same