Day at the beach, nix the bus and fly in 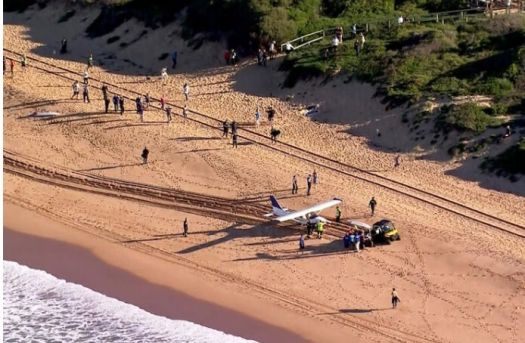 In the late 1950s the Air Force deployed a hydrogen bomb intercontinental cruise missile called the Snark. During testing in the Atlantic missile test range the Navy put out many buoys around the range which had a large sign.

That is why there is no snark today. I hope that the Compound is safe.

At first I thought it may have been Hoff’s plane, as a huge storm went thru the Compound and his internet is down. Received a message via digitised smoke signal.

@Mischka, mere minutes to get emergency services on site. Sydney has city beaches.

That was a scary soft landing, glad no one was hurt, in the plane and on the beach. ;-)

@Ms_Maddy, I can't tell if this is barely-traveled land or just outside of a metropolis. How long would it take to get official assistance there?

Wow. REALLY good thing the tide was out.

A recreational plane has landed safely on a Sydney beach with three people aboard including a baby after its single engine failed.

WOW That's quite a landing.

Woo doggies. Good the tide was out.

Good heavens! Where? When?

Well no one got hurt.