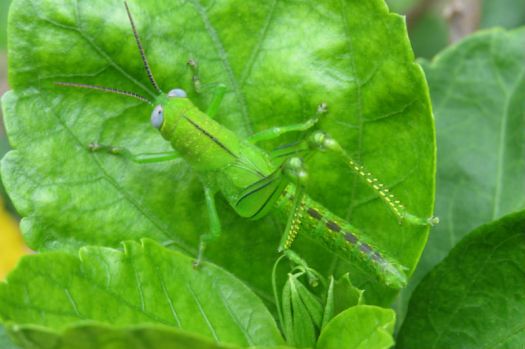 He's been chewing the top of the Hibiscus flower buds off....gggrrr!! He's about 1" long.
Created by robryan Published 22 February 2014

Thanks Jan - I hate grasshoppers - but they make good photo ops!! I'm feeling much better thanks!!!

Great photo Rob - and I'm so glad to hear you are feeling better. Lovely to see so many friends here - including Mimi, hope things are going well, dear.

Now you've got me blushing Dave :)))) Thank you SO for saying that!!!! You are kindness personified :)))) He was a good subject though - he kept still until I got the lens a bit too close for his comfort!!! I guess I was about 4" to 5" away!

This is really the best close up, even macro, that any of us has ever personally done on jigidi, Robyn!

LOL!!! You're very welcome to migrate here Barb :))) There are quite a few frost-free places along the east coast that would suit you & your plants very well!!!! Come on down:))))

He sure is Shirley - about the only thing he's good for is a photograph :)))) Thanks!

Thanks dondi - we get quite a few green ones here, unfortunately, but there's plenty of greenery to go around!!

Thanks Ank - GGRR is exactly what I feel:)))

He matched the leaves exactly Lyndee - but the chewed buds was the give-away!!! Thanks!!

He blends in so well. I'm surprise you saw him. Nice shot.

Ggggggrrr OK, but he is a beauty.

Undoubtedly he's a big nuisance, but he sure makes a pretty puzzle!☺

He sure is pretty though and it's a great close-up robyn.

Great picture, and well worth the effort. Quite an interesting bug, very different from the grasshoppers I'm familiar with - although I seldom get this close a look at them!

Well that little stinker is very well camouflaged, Thanks, Rob.

I should move to Australia, Rob and Nev.......I need to live in a sure thing no frost climate for my plants' sake. There is no such place in continental US. Of course there is Hawaii.....but Australia is much more mystical and exotic....LOL Are you taking immigrants?

Yes Rob, everything grows in FLorida-- they say, including broom handle....if you forget it for some time, it will sprout new leaves.... (^‿◕)

I think I'd rather deal with Grasshoppers than deer or rabbits Sharon:)))) They're a lot easier to dispose of :)))) Thanks!!

He's a colourful character Beekay - I'll send you some if you like :)))) Layla actually catches the occasional one - AND brings it in through the pet flap!!!!! She does the same with small lizards or skinks too - and we have a mad race to catch them before they hide & die somewhere generally out of reach!!!! She never eats them though - thanks goodness! Nothing pongs worse than a dead lizard in the heat:((((

But it's a good growing climate for plants Barb, I bet!!!
I had the camera on macro & was about 4"-5" away from him - he kept dodging around the leaves trying to escape me!!

You're right, Rob. Lots of heat and humidity in Florida, that's why it is such a heaven for all kinds of creepy-crawlies... :( Everything loves Florida.....LOL

That is the darnedest looking grasshopper that I've ever seen Rob! Was the camera in macro mode or zoom? Anyway...Sic Layla on them! I had a cat that would catch and eat them.

Well...even though he is kinda pretty...if he was eating my flowers, he would have to die. I usually don't have to worry too much about the bugs~~~~but the deer are another story. My pots are too tall for the bunnies to reach but I have to net the pots to keep the deer out. My brother has 8 foot fences to keep their yard and garden safe.
Sharon

I think Florida's climate is very similar to ours Barb - lots of heat & humidity! We get a variety of sizes & colours here too - unfortunately :((( Toyomi twists the heads off the big ones - ugh!! I just step on 'em:((( Thanks Barb :)))

Well, grasshoppers can really do damage to your plants :( In Florida, I used to have every single species there is....from a tiny 1/4" to giants 2.5" long....and in every color of the rainbow. And they were everywhere :(
Your picture is great, such details... :) Thanks Rob :)

Ha-Ha!!! Good one Laura - but I'm not likely to deep-fry or chocolate-dip any grasshoppers soon :))))

Thanks Dave - I'm happy with how this pic turned out!!! And, thanks, I'm feeling much better today!!

Thanks Janet! We haven't had many here either - but I think I'd rather have the rain and the grasshoppers!!! Today's MUCH cooler & far less humid - thank goodness!!! No rain though - but it's trying :((

yes Rob, a fabuous pic. You've made me realize a blessing for our terrible dry weather - we have very few grasshoppers this summer. Last summer after our floods, we had SO many. So, always a silver lining! Thanks for the great pic, janet. ♥ ♥

What an impressive close-up, Robyn! It's color matches the Hibiscus leaf perfectly! Very nice to see you back!!

Maybe you should remind him that they eat grasshoppers in some parts of the world.